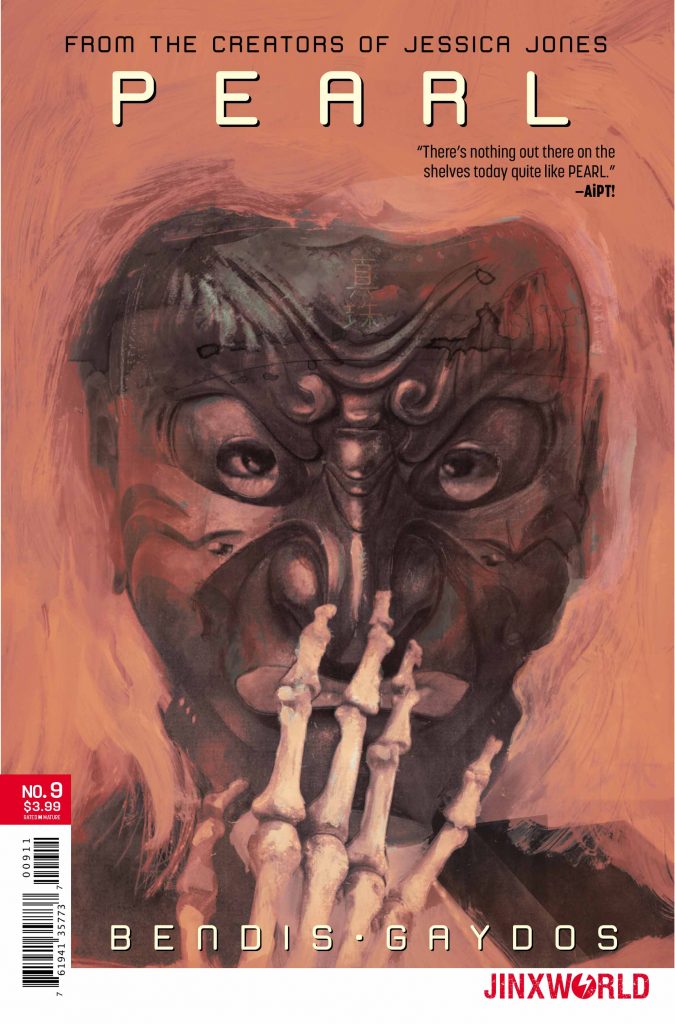 Rick Araki takes a leap of faith and flies to Japan after Pearl, but how will she respond after seeing him?  Meanwhile, Pearl schedules a meeting with Saito to get her father out of jail, but Pearl may have gotten involved with more than she bargained for…

“Maybe he should wait outside.”

Pearl is a comic that can be described with words like beauty, art, sensuality, and curiosity.  It’s a book that examines the very nature of all of these words and more through the art of tattooing within its pages.  It’s a book where the choices mad by the creative team make you wonder about the process behind making each issue just as much as the characters within it.  It’s a book that needs to be talked about mroe because its unlike anything else on the market.  It contains an albino, female, Asian lead, three attributes that need more positive representation in storytelling, and an in-depth look at an art form still considered taboo by some.  Tattoo is a permanent and meaningful form of artistic expression.  It celebration of art and the human body at a time when we have difficulties celebrating either.  Pearl is truly one of a kind.

The entirety of Pearl #9 is set in Japan.  Previous issues in San Francisco were bright and open, even when dealing with Yakuza operations and criminal activity.  Natural looking light always shined through from above in the panels.  In Japan however, all of the light feels synthetic and every scene makes it feel as though its at night. There’s no natural light inside so even scenes through bustling markets and urban night life are only illuminated with neon. Thus a stark contrast is set up between this two worlds.

The San Francisco art form was a celebration of humanity and the human body.  Tattooing was discussed with particular consideration paid to the canvas.  The spider tattoo that started it all was done when the artist looked at Pearl and just knew.  Pearl used an empty tattoo gun on herself, something that would only effect a one-of-a-kind canvas.  More illicit matters prioritized the more human side of things as well.  The Yakuza caused maximum suffering and the Endo Twins took action towards people and to cause a stir.  The body is just as much an art form as the ink from the tattoo gun, and consequences are about feeling rather than just action. In Japan, tattooing is primarily about the ink.  More cold and unfeeling, the discussions in Japan revolved around Tebori stick hand-poking.  The form is said to be the most painful and draws upon much more ancient practices.  The rest of the issue carries much the same atmosphere.  Decisions are made with a cold practicality where every action has a consequence of equal measure. 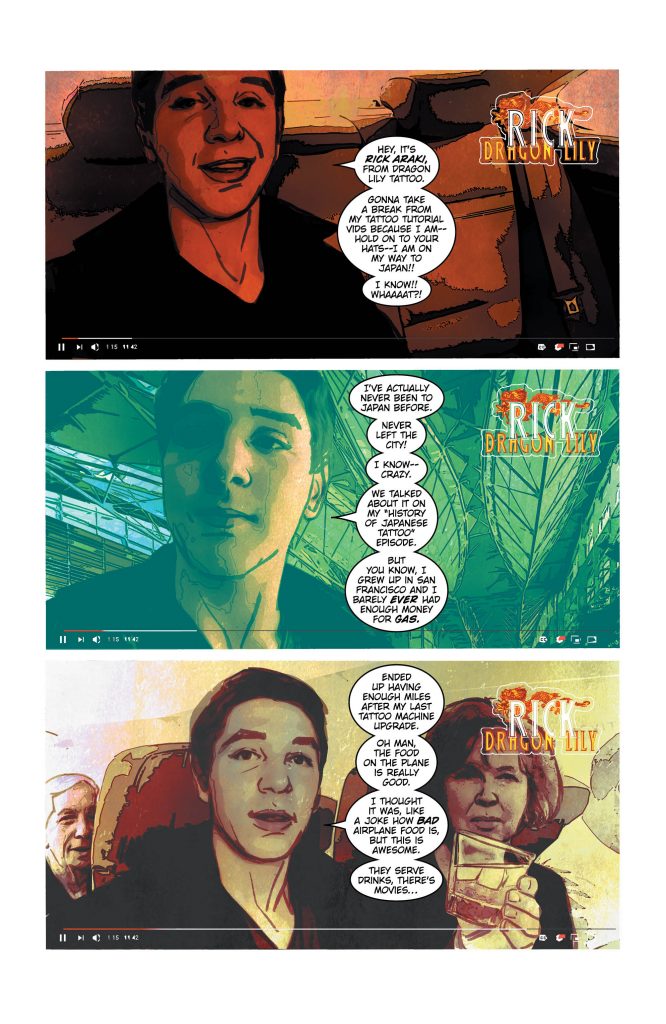 Brian Michael Bendis and Michael Gaydos make numerous, intentional decisions in order to tell a story primarily driven by love.  Most of the issue follows Rick Araki, who impulsively jumped on a plane to Japan for the girl he loves and has known for a matter of weeks.  It is a decision we don’t know whether to call beautiful or creepy at first glance but lean towards the former.  Pearl’s entire journey to Japan is motivated by her love for her parents and for the art of tattooing.  She’s trying to get her father released from prison and to own her tattoo parlor, and in doing so, gets some justice for her mother’s death in the process.  This love has multiple dimensions to it including a free, lighter, unburdened side and a darker, more haunted side.  This is shown very clearly in a beautiful and silent double-page spread by Gaydos.  The spread shows Pearl in a dream walking through that which she loves interrupted by a large skeleton that looms over her.  She walks past her mother and a striking image of a tattoo gun, her father and the image of a gun, and herself curled into a ball after she tattooed herself with the empty tattoo gun.  On the next page, Pearl crouches over a tattoo gun and a real gun with the same skeleton, presumably representing her mother, looming over her.  Which gun will she use, the gun that creates or the gun that destroys?

Pearl #9 revolves around this question and makes the arc’s focus exceptionally clear.  Last arc was about finding out who Pearl Tanaka was and where she came from.  This arc is about who Pearl Tanaka can and will become.  The decision is a heavy and restless one.  Pearl only came to Japan to free her father and her dream, but she soon learned that Mr. Miike has been controlling what was hers all along.  Pearl has a clan she could be responsible for, and that is not an easy choice to make.  Luckily she has a distraction in the form of Rick Araki.

Despite being only a single element of Pearl’s life, Rick Araki is an entire story within the story at large, and almost every panel with him in it is framed as such.  Throughout the issue, Rick’s panels are framed with the Youtube time bar and a thumbnail for his channel.  He’s a story within a story, but the video framing device suggests he may soon come to an end in Pearl’s life.  There is an extremely beautiful lovemaking scene shown in the form of a 9 panel grid laid over a building with the middle panel focusing on a single window.  The surrounding eight panels show eight amazing and tasteful expressions of two bodies intertwined.  It celebrates the human form by showing snapshots of its beauty and pleasure.  In the moment Pearl is happier than we’ve ever seen her, but after the dream sequence, it all comes crashing down as she realizes that Rick is only a distraction.  The same nine panel grid is a lot clearer at dawn.  The top three and bottom three panels complete a picture of Pearl who seems distressed at what she’s realized.  Rick Araki is just a distraction, and when Pearl picks up the gun in the very last panel, readers won’t help but worry over the consequences of Pearl Tanaka choosing destruction. 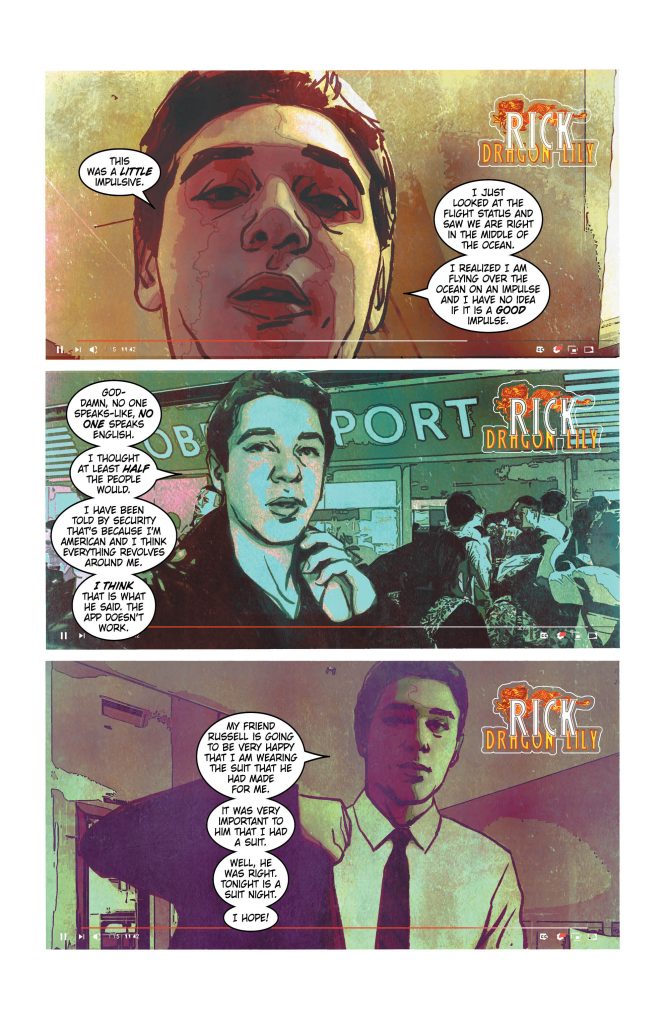 For those with a deeper interest in the industry, Pearl is unique in that you wonder just as much about the making of the comic as the comic itself.  Questions may arise constantly such as, have any of the hyper-realistic watercolor effects in any of the issues been done by hand?  How are the photorealistic effects done?  Readers may have numerous theories about how the comic is made.  Perhaps Gaydos makes different character models of each character in separate files to lay over various backgrounds to create that repetitive effect.   The motionlessness created by repeating certain images conveys a certain static feeling to every conversation.  Its as though the conversation isn’t always going anywhere.  It’s also amazing how zooming in and out on the same image can have different effects.  A chaotic, bustling, full-page image of a room in the back of a casino noisy with stock market news suddenly becomes personal, intimate, and intimidating when zoomed in on the man at its center.  Each repetition and slight alteration is done with incredible purpose and it creates effects not really seen in other comics.  Then again, that’s something that can be used to describe Pearl #9 as a whole.

No negatives here.  Pearl #9 continues to be a groundbreaking look at the life of Pearl Tanaka and all of the baggage and blessings she comes with.

Devastatingly beautiful and joyfully haunting, Pearl #9 is a unique art form in a sea of comics.