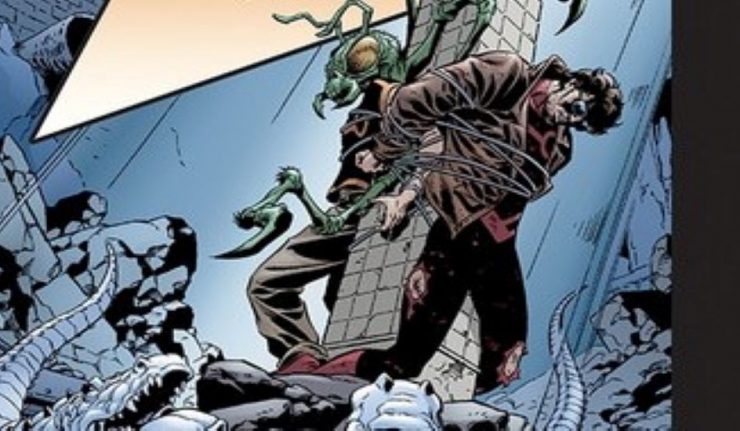 Section Zero‘s second banana, Sam Wildman (yes, that is his name), goes looking for help to find Tina who disappeared into the Ring of Fire (not that one, but you can’t get the song out of your head either now). We learn that he and the mysterious woman who own a curio shop have long history. She is the person who gave him his sword. She is way too interested in his relationship with Tina. He strikes a bargain. We can assume that will come back to haunt him

He barges into the sewers by jumping off a speeding subway train. He meets a small stooge of the Rat King and fights a giant stooge who knocks him into the sewer. It is pretty disgusting. Just when he thinks things can’t get worse, they don’t. His pals show up having used a short cut. Things go well and they find Tina and they all live happily ever after. OK. None of that happens. There are giant sewer gators though, so that is pretty terrifying.

There are some double and triple crosses and a lot of exposition. Section Zero, a secret organization that seems to be less secret by the day.

The best thing about Section Zero is the art work. Kesel and Grummett really have brought their A game to this book. The action scenes are spot on. The character design is perfect for a comic that is set in the year 2000. The characters are diverse and they all look distinct from each other. The use of color is delightful and all around, this book is pleasant to see.

Is Section Zero #3 pleasant to read? Not really. Sam’s last name is Wildman. There is a lot of two dimensional character building and motivation. This is comic that takes place in the year 2000, but it also feels like it was written then. Honestly, it might have been written even a bit earlier than that. Some of the dialogue falls flat or is totally exposition straight out of the Super Friends. “I am going to do this” followed by a drawing of the thing being done.

Tina being shoved in “the fridge” is not a great look. Granted, she is not dead, but she is “missing” and the whole motivation. I thought this was going to be her book, but no, it is Sam’s book. He is just not that interesting. I have seen his motivation done before and done better.

This book has been uneven from the start. In my first review I mentioned that Tina’s costume made no sense and now, the lack of her in this story makes even less sense. I will keep on going simply to see if comic legend, Karl Kesel can pull this one out of the ditch. For now, Section Zero is not a zero, but it is not a five either.