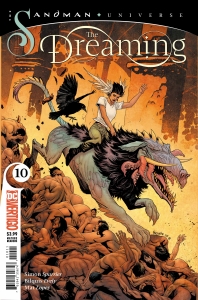 The Dreaming #10: The Dream Hunters chart the footsteps of their absent lord through realms infernal and external, stumbling at last upon an unexpected treasure…while the new incumbent upon the throne of the Dreaming—scared of its own mind—at last decides who, and how, to be.

In The Dreaming #10, Dora and Matthew continue their quest to find the Lord of Dreams, while the Dreaming’s new master and Abel engage in a philosophical discussion about various aspects of the Dreaming. It is fitting that Abel, as the keeper of the House of Secrets, is the one to make some fascinating revelations.

One such secret is that most dreams are “just memories and imagination. Jumbled up. Things don’t make sense until they are arranged into a shape.” This shape is a story, which is explains why stories are under Dream’s domain and why he kept a librarian in the Dreaming.

We also discover that Cain is not dead after all, but that whoever created the new master of the Dreaming has Cain “in some form”. Meanwhile, the new Dream Lord has instituted a memorial or placeholder of Cain’s House of Mystery until he returns to the Dreaming.

Dora and Matthew follow Dream’s trail to Hell, where they encounter the Demon Balam. Balam has been demoted to the status of a rhyming demon and there is a nice bit of humour in his struggles to keep his speech in verse. But even funnier is one of Balam’s new masters, the demon Leonard, who is mocked for he un-demony name and given the ultimate insult for a comic book character when he is called “non-canonical”.

However, there is a surprisingly touching exchange between Dora and Balam. Previously, their involvement had seemed to be entirely based on lust, but Balam seems to harbour some actual love for Dora. Dora seems to be struggling to keep similar feelings hidden, and chooses to continue on with her quest instead of giving instead.

The issue ends with a tease that the next stop for Matthew and Dora is the inn at Worlds’ End, which served as the setting for a story arc in the original Sandman title. I love whenever The Dreaming revisits familiar characters or settings from the Gaiman’s original series.

The mystery of Dream’s disappearance is starting to feel a bit drawn out now. As Abel tells us about mysteries, “all the little breadcrumbs” are leading us to the conclusion, but breadcrumbs aren’t a very fulfilling meal, and it would be nice to get to the meat of the story.

On the other hand, as long as the writing and art consistently maintain the level of quality evident so far, I can rein in my patience a bit longer.

Often when a classic title is revived, it ends in disappointment, failing to live up to the original. However, The Dreaming is a rare exception that feels like a worthy successor to Neil Gaiman’s original Sandman series. I look forward to seeing where the quest to find Dream leads.

Review: Adventures Of The Super Sons #11