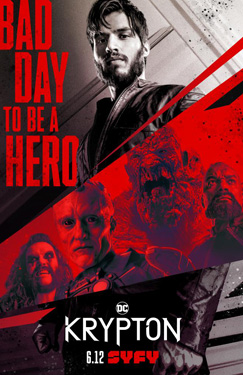 Krypton 2×01: Adam Strange returns to Krypton to find that Zod has taken over as supreme ruler and dictator of the planet. But before he can do anything he is drugged and abducted.

He wakes to find he has been captured by allies. He sees Val-El, Jax-Ur, Nyssa and a baby that Nyssa is carrying. She claims it is her and Segs baby, Cor-Vex. Adam tells them he went back to Earth in the future. However, it was different and had been conquered by Zod and then bottled by Brainiac. The news that Brainiac escapes the Phantom Zone in the future gives them hope that Seg-El may escape as well.

Nyssa reveals that they have a plan of action against Zod. It involves Wegthor, the third moon of Krypton. Wegthor is the home of the resistance and the last city-state not ruled by Zod. But Zod has his eyes set on Wegthor because it is a Stellarium mining colony. Stellarium can be converted into the warp fuel they need to power Zod’s interstellar fleet.

Meanwhile, Lyta-Zod leads the interrogation and torture of Raika. Lyta wants her to reveal the location of the creature known as Doomsday. It becomes clear that Lyta has become colder. She has now aligned herself with Zod and plans to help him take down the resistance.

A holographic image of Val guides Seg through the Phantom Zone. He is led to the way out but must use his crystal to escape. Once he opens the portal out Val reveals himself to really be Brainiac. The two are sucked into the portal.

When Seg wakes, he finds himself on the planet Colu with Brainiac. Colu is Brainiac’s home world. Brainiac believes they have a common goal and need to work together. But Seg refuses and attacks Brainiac.

After six months of searching, Nyssa finally locates her father. She finds him in Bokos cleaning sewage drains. She seeks answers about her past. But before she can get anything, Lyta kills him and captures Nyssa.

Lyta’s Sagitari forces locate Adam, Val and Jax-Ur. Adam covers them as they make their escape. But Adam is cornered and as a result is forced to use his Zeta beam to teleport out. Fortunately for Adam, his Zeta beam works. Because it was successful, it took him strait to where Seg was located. But when Adam finds him, he is in a daze and standing over the body of Brainiac.

After the two quickly get reacquainted, they soon begin bickering. But that ends quickly when they run into Lobo. 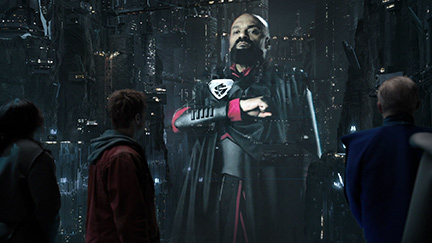 The visuals on Krypton continue to be beautiful. They are cinematic and rival many big budget Hollywood films.

The acting in the show is top notch as well. For instance, Colin Salmon plays a powerful Zod. His demanding presence steals every scene he’s in.  He embodies everything that makes Zod so threatening.

Characters like Brainiac and Lobo are intriguing. Neither character has a large role in this episode and yet they both demand more screen time. Brainiac’s interaction with Seg was very interesting. Even though it appears Seg stopped Brainiac, we all know he isn’t dead. I’m excited for his return. As for Lobo, his appearance was brief, but his characterization seemed spot on. I’m curious to see what led him to Colu in the first place. Perhaps since he is a bounty hunter, he went there to hunt down Brainiac.

Even more interesting is the idea of Lobo having to go a few rounds with Doomsday… but I don’t think a television budget could do that battle justice. 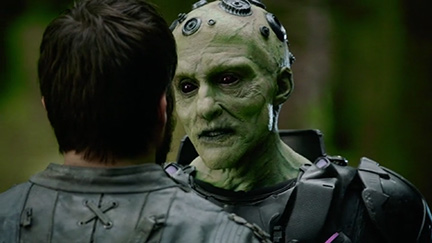 Since it is the first episode of a new season, it sets up the season by creating questions for audiences to ponder. Because of that, it is too early to tell whether anything is negative in the narrative. However, one thing that has bothered me since season one is the depiction of Adam Strange. To be clear, I am not criticizing the actor or his ability, I am just disappointed in the portrayal. He’s not much more than comic relief at this point. The comic version of Adam Strange is anything but comic relief. He is an intergalactic adventurer.

Besides his portrayal, I just don’t understand why he was chosen in the first place. Adam Strange is not a time traveler. DC has plenty of time-travelers, why weren’t any of those chosen instead? 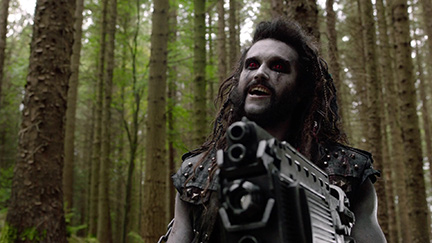 Much of the criticism about Krypton Season 1 came from its slower pace. It seems as if Syfy listened because this season seems a bit faster paced. At least this episode.

Overall, I think Krypton 2×01 was an excellent start to the new season. With the appearance of Colu and Lobo we are already getting to dive deeper into the DC Universe and I am always happy about that.