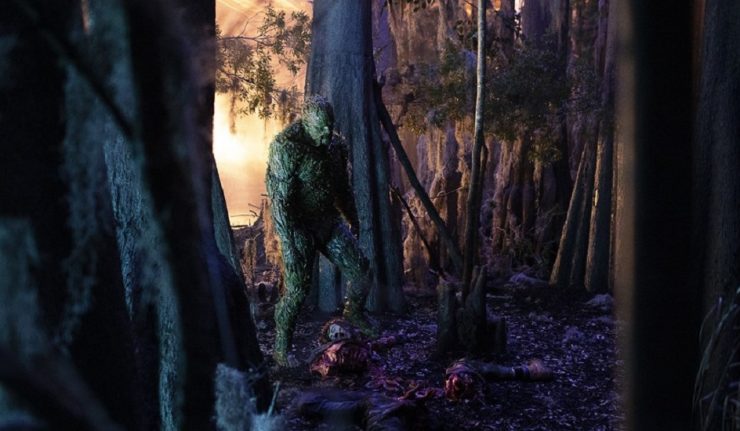 Abby is pretty shaken up after the events of the previous night, but she is determine to find out what happened and if the disappearance of Alec Holland had anything to do with it.  At the same time, something rotten is brewing within the swamp, and it’s coming after an already tortured Alec Holland.  Marias is becoming restless, and this disease is beginning to affect more than just the infected.

“All life is a zero sum game Dr. Arcane.”

We should all fear the day when nature fights back.  Humanity, while having the limitless potential for good, is still incredibly flawed at the cost of the world around us.  We’ve seen these themes play out time and time again, but Swamp Thing 1×03 is able to do so with an unmatched sense of authenticity.  This is not some black mirror a world away.  “He Speaks” may contain elements that may fall outside the bounds of realism, but it takes place in our world and effects people just like you and me.

Swamp Thing 1×03 is the best episode of the series so far and is one of the best pieces of original content DC has put out to date.  All of the small issues that dampened the experience of episodes one and two, even a little bit, have been fixed.  The color palette is a lot better this episode, so that we can see Swamp Thing and others at night.  This episode especially gives us a clear view of Swamp thing’s phenomenal design.  It’s extremely textured and powerful while also displaying some vulnerability.  It’s truly a classic comic character brought to life, and it’s sure to please anyone looking to see this character on-screen. Swamp Thing’s use of sound can also not be understated.  There is always noise or soft music, but you never notice because it creeps up on you.  There are soft whistles and strings that are brilliantly used to convey a heightened sense of tension without you even realizing it.

Additionally, Swamp Thing  1×03 has finally shown what kind of show it wants to be.  At Swamp Thing’s core is a mystery that affects the entire town.  It’s investigative nature allows the show to use elements from other genres as well, but solving the mystery of the illness and the Marais swamp is what propels the narrative.  The aspect that keeps you tuned in every episode, however, is the characters.

Marais is a full town.  This isn’t a setting where only five people matter and everyone else is inconsequential.  This is a living, breathing, small town where most actions have consequences that go beyond the scope of individuals.  Everyone from Abby to the Sheriff to Jason Woodrue all have a stake in what’s happening, so the show feels more like a community.  Liz Tremayne is more than just the supportive best friend.  She is also a determined investigative reporter who is set on uncovering the truth about Avery Sutherland. The town may be small, but there is still high-stakes journalism and shady police investigations.  It’s large enough to contain local corruption, but small enough to be manipulated as an entity,   The show is dramatic beyond the supernatural elements as sneaky, underhand business decisions have just as much of an impact as a horrific insect attack.  Marais is a town that feels full, and that’s all that matters.

The show is filled with characters that play well off one another.  Jason Woodrue is a borderline sociopath, a little unhinged, and has extremely little empathy beyond flora, which makes him an excellent pairing with Abby Arcane.  Crystal Reed’s performance as Abby Arcane carries enough emotion and empathy to support the entire show on her own.  It’s the best performance so far in any DC universe property, and it’s a shame that such a great character was prematurely cut short. Despite the supernatural elements, this is a very human show with very human concerns.  There are multiple scenes that feel like a medical drama as Abby tries to investigate and tame this infection.  The show is researched a lot more than many other superhero properties we see nowadays with medical elements feeling like more than just scientific jargon and comic book elements like The Rot making subtle appearances.

Beyond mere human matters, however, there is a more sinister story brewing.  Swamp Thing is confronting an profound struggle between man and monster.  Does he have any humanity left?  Will his love for Abby transcend what he’s capable of?  There is a lot of intensity to the idea of nature fighting back and wrestling with changes you can’t even begin to comprehend.  Swamp Thing 1×03 knows when to sparingly raise these more supernatural questions and when to to display its elements of horror.  There is a lot more biological horror, especially with insects, in this episode, and it is terrifying.  Nothing makes your skin crawl like bugs, mutant plants, and rotting flesh.

Occasionally, the show has to frequently cut away from the horror elements, likely because of the effects budget, but it isn’t enough to take you out of the experience.

Swamp Thing 1×03 continues to be a show fueled by character and emotion while elevated by a sense of mystery and supernatural horror.