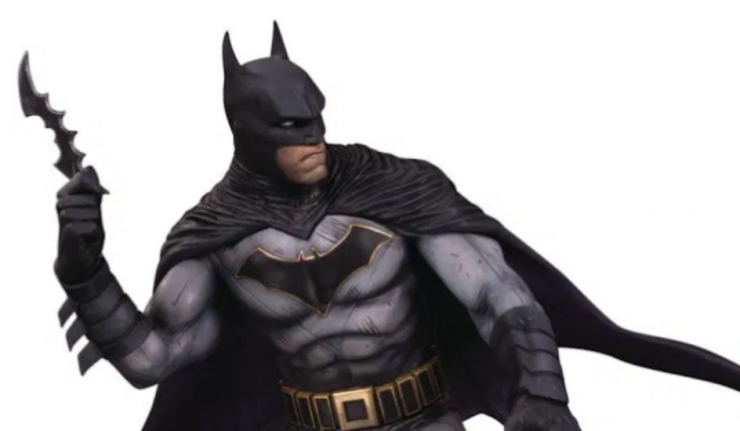 DC Collectibles has announced their April 2020 statue, figure, and prop lineup, featuring plenty for Bat-fans to get excited about. All of the items are now available for pre-order.

BATMAN THE ADVENTURES CONTINUES RED HOOD ACTION FIGURE
Inspired by the beloved and Emmy Award-winning Batman: The Animated Series, this new era of the line features characters never before seen in the series with designs by Ty Templeton in the iconic animated art style. These 6″ action figures include a number of accessories and come with their own unique character bios by famed Batman: The Animated Series writer Paul Dini.

Over the years, Red Hood has become one of DC’s most popular characters. Here’s your chance to include this leading DC anti-hero in your Animated Series adventures. The figure comes with two heads: one shrouded in the eponymous red hood and one as unmasked Jason Todd.

DC BOMBSHELLS THE HUNTRESS STATUE
Taken straight from the variant cover of Detective Comics #43 during the Bombshells variant cover month in 2015, this Huntress Bombshells statue brings Emanuela Lupacchino’s design to life. Strongly inspired by the rockabilly aesthetic and fashion, this statue will make you want to join in on the music and fun!

DC DESIGNER SERIES BATMAN BY OLIVIER COIPEL STATUE
Based on the cover of the Dark Nights: Metal tie-in Batman: Lost, this all-new DC Designer Series statue by Olivier Coipel features Batman mid-Batarang throw. The piece is a must-get for any Batman fan.

DC GALLERY RED SON BATMAN COWL
On Earth-30, a young boy sees his parents brutally murdered by Stalin’s police force in the Soviet Union, and grows up to become the Batman of that world. This all-new DC Gallery Red Son Batman cowl is a 1:2 scale replica of Batman’s headgear as it appeared in Superman: Red Son #1.

HARLEY QUINN RED WHITE AND BLACK STATUE BY ADAM HUGHES
Joining the ensemble of statues in the Harley Quinn Red, White & Black line is a 7″ version of Adam Hughes’ take on the Clown Princess of Crime. Originally a 9″ statue seen in the DC Cover Girls statue line, this new piece will feature Harley in the colors red, white and black only. This was such a popular design back in 2010, it was a no-brainer to add to the Harley Quinn Red, White & Black line.