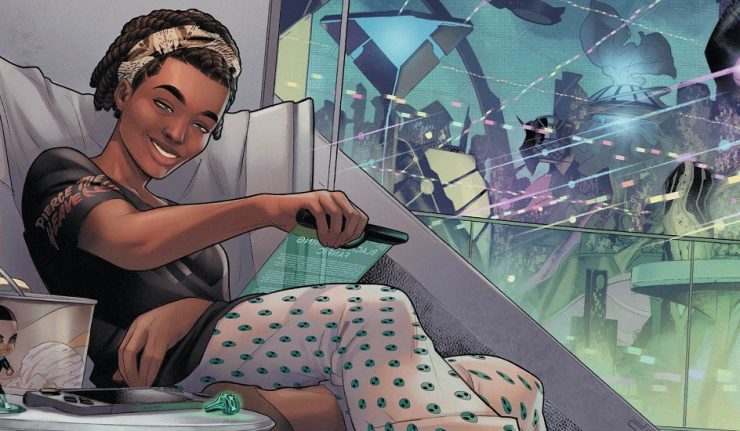 Jo continues the now “double homicide” case in City Enduring.  Along the way she continues to learn more about the world she’s in and the aliens around her.

Right of the bat, the in story recap is a welcome element.  Far Sector #2 builds off of the events of the first issue, and it’s a good thing that the reader isn’t thrown in feet first.  This will help especially with all the alien names, places and cultures mentioned.

One humorous moment that stands out is Jo’s description of “coffee” in City Enduring.  Well, it’s not really “coffee” as her barista explains.  It’s an alien attempt to create something similar with what’s available, notably, coffee beans are NOT available.  Jo does her best to be polite about it, but her reaction to it in her internal monologue is very funny.  It’s a nice light moment in a fairly heavy and serious book.

Jemisin does a nice job of world building in this issue.  With so many new concepts, it’s fairly dense with a lot of exposition.  And, that’s ok!  This type of story needs that.  There are plenty of prose science fiction novels that do this.  Think of something like Larry Niven’s Ringworld, for example.  Nearly everything is new and different and requires extended explanation, but once the reader gets it, the story begins to really work.  So far, the concepts that Jemisin introduces are interesting.  It’s nice that Jemisin is not trying to rush through things, but rather explore the cultures and concepts.

Along those lines, Jemisin appears to reference a specific classic sci-fi work in this issue in the explanation of the “cannibalism” practice of the keh-Topli.  They are one of the alien races living in City Enduring.  As it turns out, they eat others.  They have found other sentient beings to be tasty!  In a slightly disturbing moment, one of the Councillors explains to Jo that with the lack of emotion (artificially induced) in City Enduring, the keh-Topli have found this cannibalism satisfies the feeling of loneliness.  Suddenly, there’s another souls inside with them…..  This is not dissimilar to the way the eating of deceased loved ones is described in Robert Heinlein’s Stranger in a Strange Land.

There’s a bit of text to sift through to figure out who’s who and what’s what as everything is alien to the reader as well as Green Lantern, Jo Mullein.  At times this works, and other times I’m a bit unsure.  Also, somewhere in the middle are the references, or themes pulled from classic sci-fi works.  As mentioned in the review of Far Sector #1, there is definitely a Blade Runner vibe with this series.  While it is enjoyable, with this issue’s mention of the “cannibalism” of the keh-Topli so reminiscent of “grokking” in Heinlein’s seminal work Stranger in a Strange Land.  At this point it’s unclear if these references to other works will be a pleasurable homage, or end up feeling more derivative.  If every issue presents a new borrowed concept, it lead to a sense of too much borrowing, even if the elements are assembled creatively.

Though not hugely troubling, Jo doesn’t make much headway on the case itself, rather what she does learn is doorway for both her and the reader learning about the strange place in which she is living.

Far Sector #2 is a solid installment of this 12 issue mini-series.  The world building is effective, and Jemisin really lets the reader learn along with Green Lantern, Jo Mullein.  There are a few doubts about how the sci-fi references will function in the long run, but at this point they are working adequately.  As this case develops, there is a real sense that there will be a massive twist/ reveal that will elevate this story to a different level.