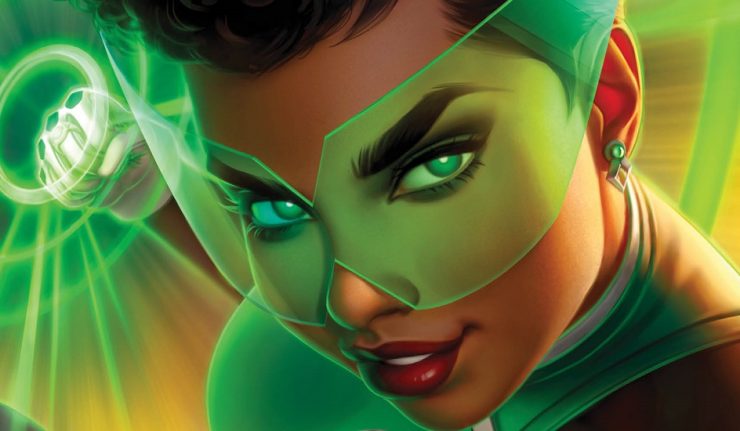 Learn Jo Mullein’s backstory as she herself finds another lead by approaching the mystery “noir style.”  And finally, Far Sector #5 clarifies the relationship between The Nah, The @At and The Keh-Topli.

Immediately, on page one, the breakdown of the three species that inhabit City Enduring is an immensely helpful resource in understanding everything that’s going on.  Jemisin presents the reader with some really interesting and innovative life forms in the summary of the species.

There are two things that Jemisin does with Jo in this issue that really strike a chord.  Jo’s backstory on Earth is revealed, and it’s quite a tale.  It’s probably not what anyone is expecting, but it fleshes out her character so completely when taken with the other things we’ve learned about her and her family in other issues, especially #3.  Secondly, when Jo begins to approach the mystery by recalling the “film noir” mysteries with which she’s familiar, it tells us a bit about Jo, but also helps the reader frame the story in a more familiar context.  This also shows that “people are people,” even if they aren’t “people.”  This approach gets Jo a lead that turns out to be significant.

When Far Sector is at it’s best, we get a lot of characterization and exploration of the relationships between not only the characters, but the three species on City Enduring.  Far Sector #5 also reveals aspects of the leader of the protest, which is a bit of an eye-opener for Jo, as well as the @At who is assigned to help her.

While one doesn’t want to be force-fed all the information, it seems this series would’ve benefited from a deeper explanation of The Nah, The @At and Keh-Topli earlier on.  It’s understandable that this is supposed to put the reader in Jo’s shoes, to come to understand things as Jo comes to understand them.  Still,  this page one would’ve worked better as page one of issue #1.

This might be the best issue of Far Sector, so far.  Understanding where Jo has come from is significant.  But, so are the things we learn about The Nah, The @At and The Keh-Topli.  Perhaps, the most satisfying aspect is that things are coming together and not only in terms of understanding more about the “people” of City Enduring,  but how important this assignment is to Jo.  She’s at a crossroads in her life and is clearly in search of direction and meaning.