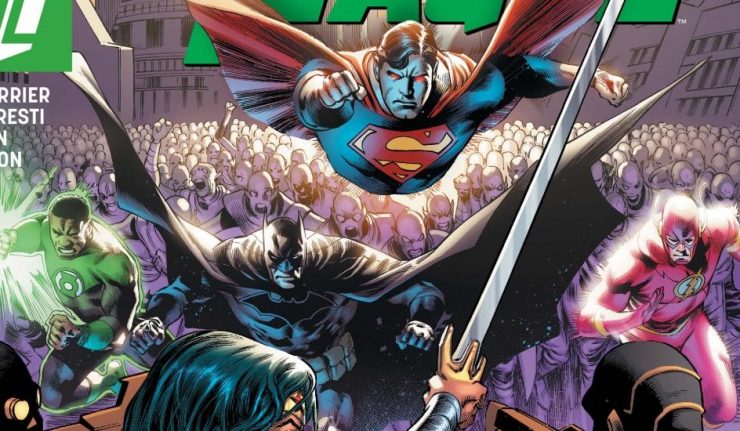 Justice League #49: “The Rule of War” part two! After the devastating events of last issue, the League is separated and labeled as alien visitors on a war-torn planet. With events spiraling out of control, and no leader to guide planet Trotha’s citizens, how can the League save this world without interfering? As the team battles rogue factions, Batman makes a startling discovery that will threaten any hope the team has of returning home!

In the aftermath of the Vermidiim on the planet Trotha, the League find themselves in a difficult position. Just having deposed the Trothan queen, the citizens acclaim the League as their new rulers. The League is reluctant to do so, but the male members of the team cannot see any other alternative.

On the other hand, Wonder Woman flatly denies that the League should rule Trotha, even as a temporary measure. Diana tells Bruce of the an Amazonian legend of a Queen Ischyria who freed all the people of her world, becoming their queen. The various ways Ischyria tried to keep her people united. The various methods parallel the methods Diana’s teammates have tried to bring the Trothans to self-rule. Eventually, Ischyria’s subjects grew restless with her and overthrew their queen.

The use of this legend is quite an effective device to convey the different tactics the League has tried with the Trothans, and helps to illustrate why they are unsuccessful. However, I wonder why Spurrier picked that particular name for this mythological queen. In Greek, Ischyria means “retention of urine”. Is this meant as a commentary against monarchy, or was this unintentional?

Instead of joining her teammates in ruling the Trothans, Diana chooses to go among the people and learn about their customs, history, and culture. There are a number of instances, where the male Leaguers make mistakes because they are judging by Earth standards.

Like Ischyria’s subjects turned against her, the Trothans turn against the League. However, in this case, it is the doing of a someone else, who broadcast’s Diana’s words out of context to the Trothans, causing them to reject the League as “warmongers” and “alien agressors”. But who is behind this? The Vermidiim, The Trothan’s former queen, or someone else?

There are some fascinating philosophical and political questions being dealt with, but the the story does seem somewhat contrived to put the League in this specific situation. I would think that ordinarily, most if not all of the Leaguers would be against setting themselves up as rulers of an alien world. Also, they would likely want to stay on an alien world for a week, ignoring their other responsibilities back on Earth. I would expect that once the immediate threat was taken care of that they would have John contact the Guardians, who could send a detachment of Green Lanterns to take over the situation.

Also, I would also expect that Diana would to be the most disposed towards taking on temporary rule of the Trothans. After all, she was raised in a society that was ruled over by a benevolent and just queen. And I would expect Superman to be the most opposed to taking on the role of an oligarch.

Justice League #49 is a well-written and beautifully illustrated issue, continuing this fascinating adventure. It will be interesting to see how the team manages to extricate themselves from a situation that is as challenging philosophically as it is physically.