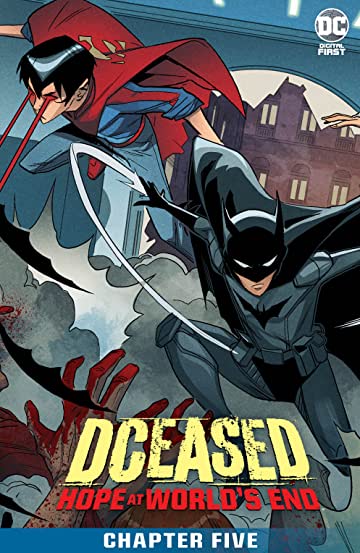 “You know the problem with stealing an invisible jet?  Your visibleness ” – Jonathan Kent to Damian Wayne Damian, Jon, and Cassie take a trip to the deadliest place on Earth—Gotham City! Damian has unfinished business in the fallen city and his best friends aren’t going to leave him to face it alone. A Trinity team-up for the ages! 2019’s blockbuster series, DCEASED, provides the fifth digital submission with stories set before the fall of Earth! 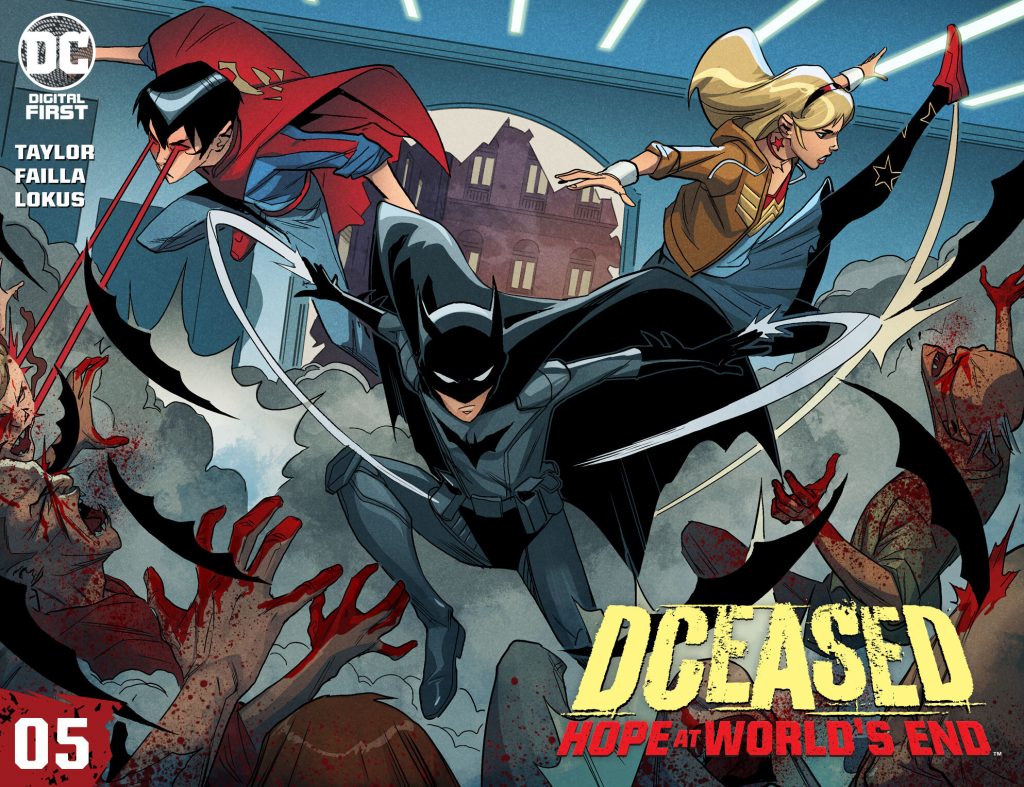 In DCeased: Hope at Worlds End #5, we find a new Trinity of Superboy, Batman, and Wonder Woman.  Jonathan Kent, Damian Wayne and Cassie Sandsmark. Tom Taylor turns the page nicely in that Cassie and Jonathan’s origins are pretty solid in the DC Universe as Wonder Woman’s sidekick and Superman’s son respectively.

But how does Damian become Batman? Tom Taylor really treats the demise of Batman in his universe with a lot of respect and provides Damian both closure as well as a new beginning.

What might be viewed as a tantrum or typical anger that we have been accustomed to with Damian is now displayed as a sense of new awareness of both himself and his new role.

Taylor also gives Talia Al Ghul (drawn magnificently by Marco Failla) a strong role in Damian’s turning the page of his role as a Robin and now that of Batman.  While Talia is as cold as ever, we the reader needed to see a meeting between Talia and Damian so there could be some closure on Batman’s life.  Talia is pure Al Ghul.  Damian is not.  I like what Taylor has done there. 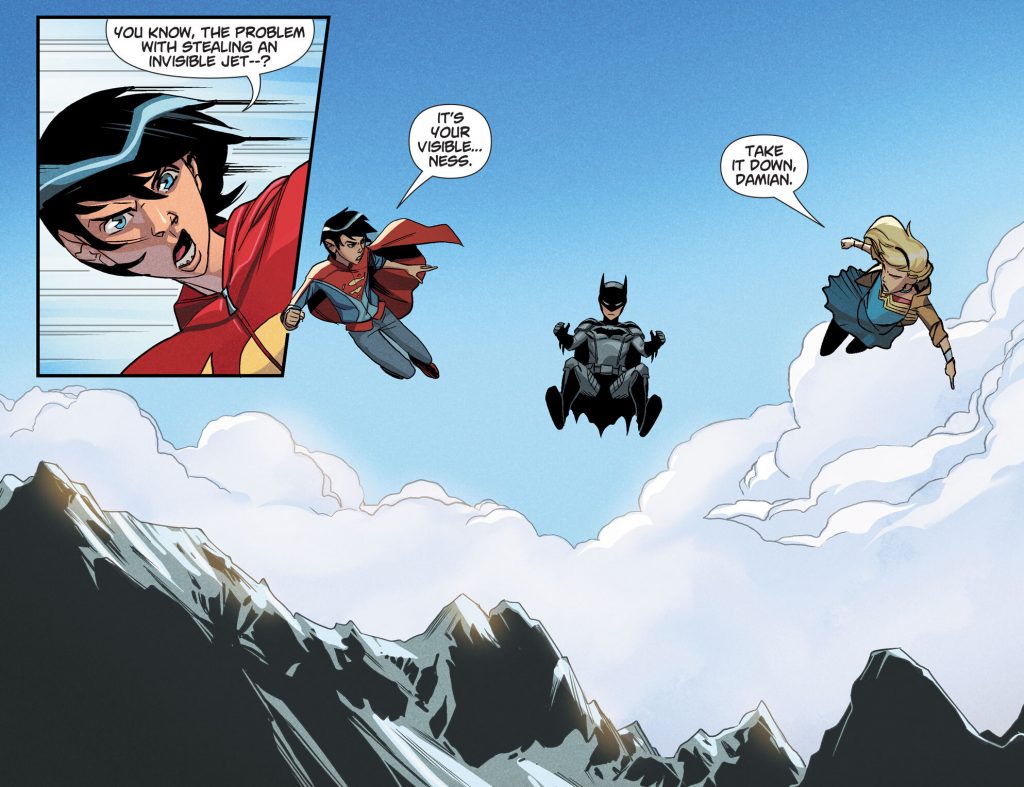 To witness Damian break down in the Batcave in the arms of Stephanie Brown (aka Spoiler/Batgirl) in front of his friends and his mother (“My mother loved Bruce.  She’s just trying to start a fight.”) lets the readers know he does have a heart.

Jason Todd’s burying of Bruce, Dick and Tim provides insight of the relationship of all the Robins with their “father”.  Though Todd is not present, his gravestones resound loudly in this issue!

Stephanie’s role as a mentor to Damian… her character, in my opinion, has always been complicated.  She is the only to ever assume the mantle of the bat as well as be a robin in what appears to be simultaneous time lines.

Taylor gives her the perfect role in this prequel.  Now I am interested in how this will all play out. 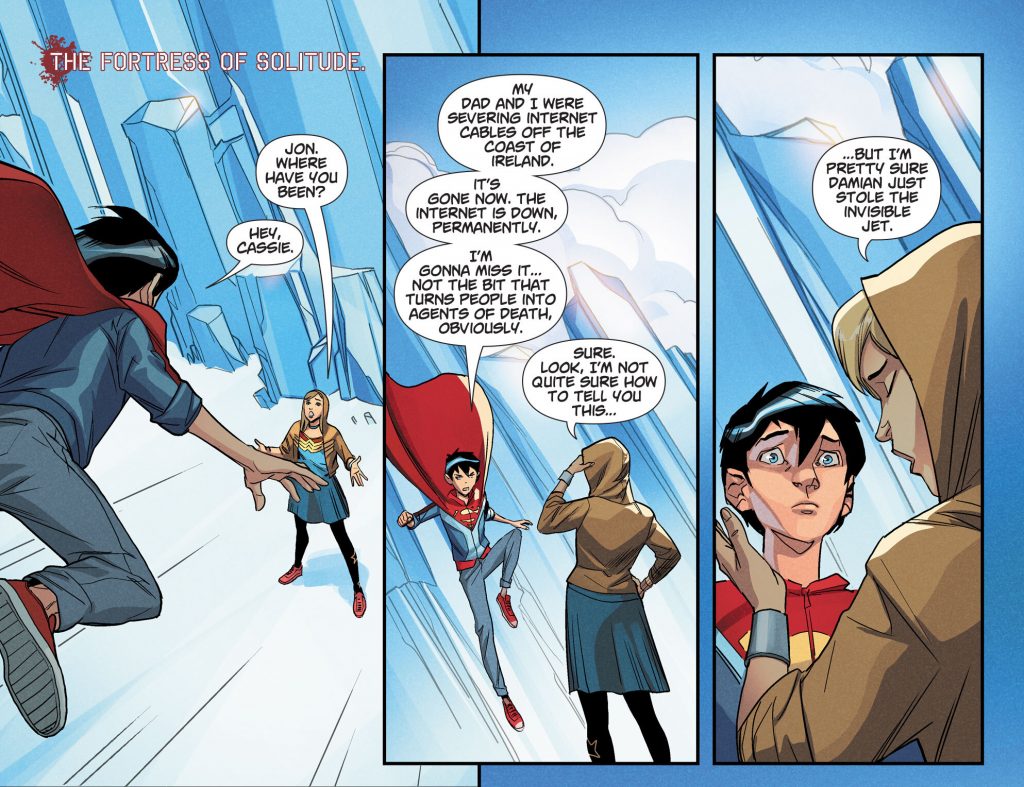 I’m all over the place with this series. Where is Stephanie? So many questions…..

Taylor does some of his best writing in this issue as he is treating this prequel as a character exploration.  Marco Failla does some of his best work as well as this issue needed to be simple.  A child dealing with the death of his father and a mother who is none too sympathetic.  The frames are lighter due to Failla’s pencils.  I hope this series continues as there are too many great stories within Taylor’s DCeased World!