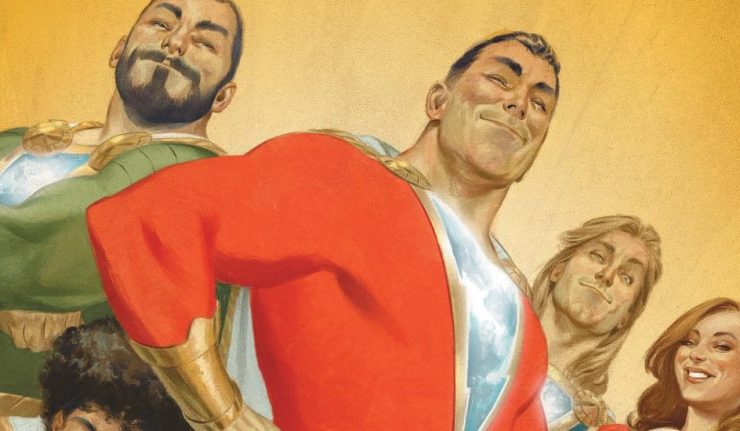 Shazam #13: He’s baaaaaaack! The greatest kid superhero ever faces the worst teen supervillain as Billy Batson and the Shazam family confront Superboy Prime. Superboy Prime has the powers of Superman and none of his heroic morality-can even Shazam stop the most powerful threat he and his family have ever encountered?

Geoff Johns has brought together nearly all of the threads of his story. Billy and the rest of the family are facing Sivana, Mister Mind, the Monster Society of Evil, and Black Adam. And thanks to Mr. Mind’s mental domination, Billy’s father as well.

We also find out that C.C. Batson only came looking for Billy because he was under Mr. Mind’s control. He was only a petty criminal who didn’t care in the least about his son. It’s pretty tragic for Billy to find out that his reunion and reconciliation with his father has been a lie.

Mind forces Billy to recite a spell that unlocks the Magic Lands and merges them and Earth into a singly realm. It is at this point, we see Superboy Prime again. Likely, the merging of realms is what will allow him to fully return to the DCU.

But Billy recites a second spell, which shrinks him to the same size as Mr. Mind. I have to admit, I found this an unusual, but intriguing.

I have found that Shazam has had too much going on for most of the run. I’ve been looking forward to Geoff Johns finishing this first story, so that he could give us stories that without quite so many characters and plotlines to continue. However, the title has been cancelled, ending with issue #15.

It’s probably for the best that the title has been cancelled, considering the difficulties Johns has had keeping it on schedule. However, I think it would have been better to give the title to another writer. Hopefully the title will be revived after a hiatus when Johns can devote the time to a monthly title.

Despite the overly complex story, Johns has managed to make Shazam #13 an entertaining issue. The next issue should be interesting, as Johns has to wrap up this entire storyline before guest writer Jeff Loveness takes over to write the final issue.