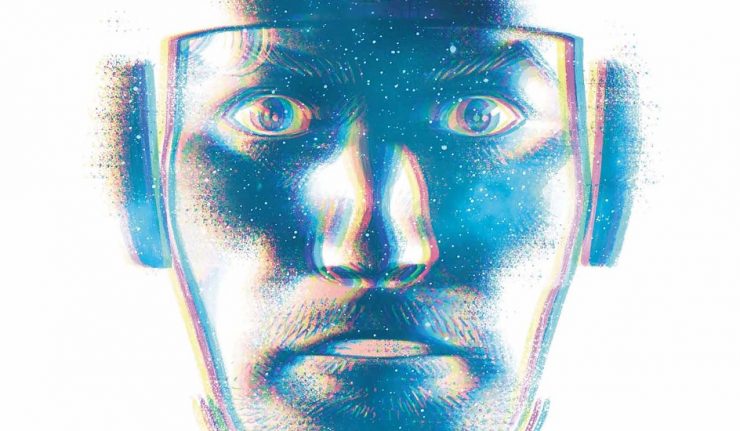 Mr. Terrific travels to Rann to review the documents on the Pykkt war, but runs afoul of Sardath when he attempts to see the Pykkt papers.  He returns to Earth to a most unwelcome reception from Alanna.

Strange Adventures #4 gives the reader a look at Michael Holt, Mr. Terrific as a detective.  A very hard nosed detective at that.  On Rann, he is given access to the Rannian files on the Pykkt war.  However, what he really wants is the Pykkt documents detailing their version of events.  This causes some serious trouble with Sardath, Alanna’s father, and the Chief Minister of Rann.

Most importantly, this issue provides some clues as to what’s going on, or at least points to a few things of interest.  Firstly, the fact that the Rannians don’t want Michael to see the Pykkt documents indicates that the Rannians  are hiding something.  It all seems very simple at first, they claim no one has been able to translate the Pykkt language.  It doesn’t sit well then when Michael shows he’s already learned it on the trip from Earth.  This is a wonderful character moment for Michael.  It gives a real gauge of his intellect.  That’s a feat worthy of very few.  He’s essentially learned a new alien language in just a few days!

The character moments continue for Mr. Terrific.  When he’s pressed, his determination and spirit of defiance are demonstrated in no uncertain terms and one can’t help feel excited when he doesn’t back down from Sardath.  It may not be as emotionally touching as the moment in issue #2 when Michael asks his T-Sphere to ask him a question he doesn’t know the answer to, but Mr. Terrific is getting just as much attention as Adam and Alanna and it’s amazing.

The comic book artist quote in this issue is from Harvey Kurtzman:

It definitely feel like it describes Sardath and Alanna.  Michael’s investigations so far appear to be rattling them and so they panic.  They go a bit extreme.  This will clearly alert Michael that he’s on to something.

Not only does Michael’s request of the Pykkt documents distress Sardath, but he also asks directly about Aleea (Adam and Alanna’s daughter) and where she is.  Sardath’s response is a slap to Michael’s face.  Has Michael just struck a nerve because Aleea is dead like they claim, or is there something else going on?  Is she being held prisoner?  Or, could it be something else entirely.  Either way, these moments in this issue build the tension of the mystery, yet reveal just a bit to Michael’s investigation progressing.

It should go without saying that the art by Gerads and Shaner continues to be outstanding.  They both have a command of communicating through facial expressions that elevates their work.  Additionally, with this issue, some of the mystery may be revealed through a comparison of some of the artistic depictions.  Pay close attention!

Like the review of the last issue, this section is not necessarily negatives, just aspects which are undefinable or troubling.  I believe they are part of the mystery, and all will not be clear until later.  As with previous issues, something just doesn’t seem right with Alanna.  In previous issues I’ve mentioned that it doesn’t make sense for a Rannian woman to be smoking.  In Strange Adventures #4, for the first time, it genuinely appears that Alanna is hiding something.  Like her father, Sardath, she seems rattled.  Her message to Michael when he returns to Earth that “it’s time for (him) to be done,” is clearly a threat.  It’s not a plea, it’s not simply her being afraid of what he uncovers.  It’s obvious in his first examination of evidence that he’s on to something.  Is it the Pykkt documents, or the implication of Aleea’s fate?  Don’t forget, she was called Aleena in the first issue…which was incorrect!

The second curious bit is the coloring of the complexion of Alanna’s skin.  Traditionally, Alanna, despite being alien has been depicted with the same caucasian flesh tone as Adam Strange.  In “The New 52” when she was re-introduced, she was colored darker and would be identified as a woman of color.  Strange Adventures has presented us with a bit of a poser.  In the previous three issues and in this issue’s sequences by Mitch Gerads, Alanna appears to have the same skin tone as Adam.  In other words, she and Adam look the same.  However, near the end of Strange Adventures #4 when Adam is shown returning to Rann in the past at some point in the midst of the Pykkt war, Alanna not only looks a shade or two darker, but she is depicted with shorter hair and looks a little bit more like her “New 52” incarnation.  To add to the mystery, there is a Gerads panel and a Shaner panel side by side that begs the reader to compare the two depictions!

Technically, if there is a question of Alanna’s identity, it is being executed wonderfully, but it is unclear at this point.  It is yet to be determined.  On the far outside chance it’s an unintended variation, then…it truly is a negative.

Strange Adventures continues to be truly outstanding in its depth and breadth, as well as with the mystery at its core.  There’s no shortage of character moments as Strange Adventures #4 plays a little more to Michael Holt.   It’s really his issue.  While not told entirely from his point-of-view, he shines brightly.  What really did happen on Rann?  Is Adam a hero or something else…. 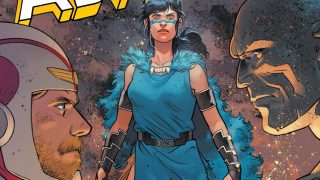