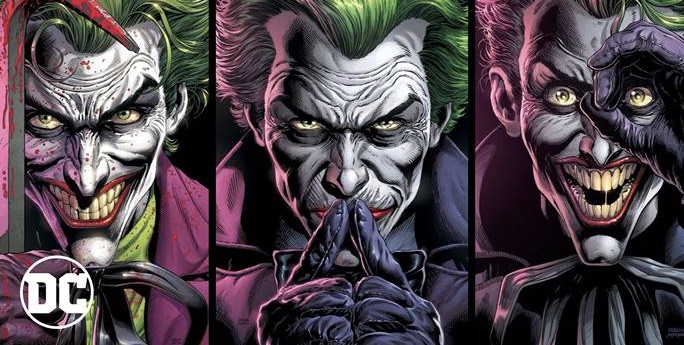 It doesn’t get darker than this! The spotlight is turned up on high as the Clown Prince of Crime’s origins are redefined in the event of the season Batman: Three Jokers and in this chilling new trailer for Geoff Johns’ opus, who will get the last laugh?

The much-anticipated event of the season has arrived! Geoff Johns and Jason Fabok have been stringing us all along since DC Universe: Rebirth #1 dropped the hint that the most nefarious villain in the Dark Knight’s gallery of rogues may in fact be more than meets the eye, and an even greater threat than anyone has ever imagined. Batman: Three Jokers examines the possibility that Batman’s foe may in fact be not just one psychopath that has plagued him through his career but in fact three separate individuals that have masterminded the chaos!

The series focuses on Bruce Wayne’s realization that his war on crime is taking its toll on him, and at the center of it, The Joker has cut him the deepest, especially when it’s come to attacking his family. Batgirl, Barbara Gordon is still wrestling with the aftermath of the Joker’s “Killing Joke” and Jason Todd, The Red Hood has never let go of the maniac’s assault on him — it’s shaped his vigilante identity, and pushed Batgirl to new levels, preparing for the fight to come. With Batman: Three Jokers #1 already on shelves, here is a terrifying dive into the mind of Three Jokers…

Check out the trailer here:

Batman: Three Jokers is written by Geoff Johns with art by Jason Fabok and Brad Anderson and Issue #1 is out now!