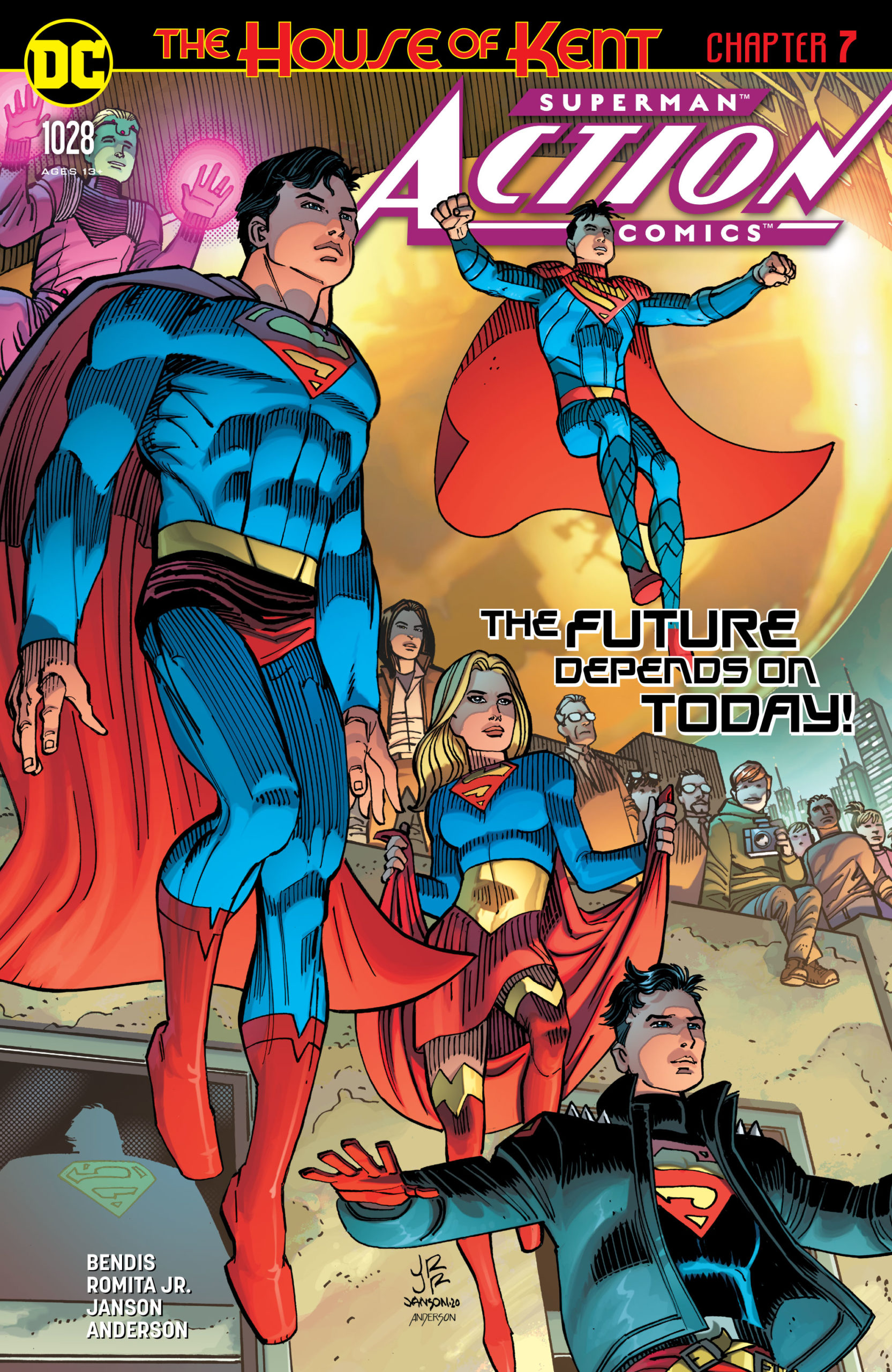 Action Comics #1028 is a character focused issue that pulls together some of the dangling plots from the final story arc, “The House of Kent.”  Jimmy owns the Daily Planet, why doesn’t Clark remember Conner…etc….

The best thing about this issue is that Bendis gets to focus on character, and it is his strong suit, at least when he understands the character he’s writing.  Or at the very least, it’s engaging as he tries.   The moments with Clark, Conner and Ma and Pa shine, as does his interaction with his son, Jon.  Acknowledging the multiversal shenanigans is a solid moment as well, even if it’s not always clear exactly what has happened. 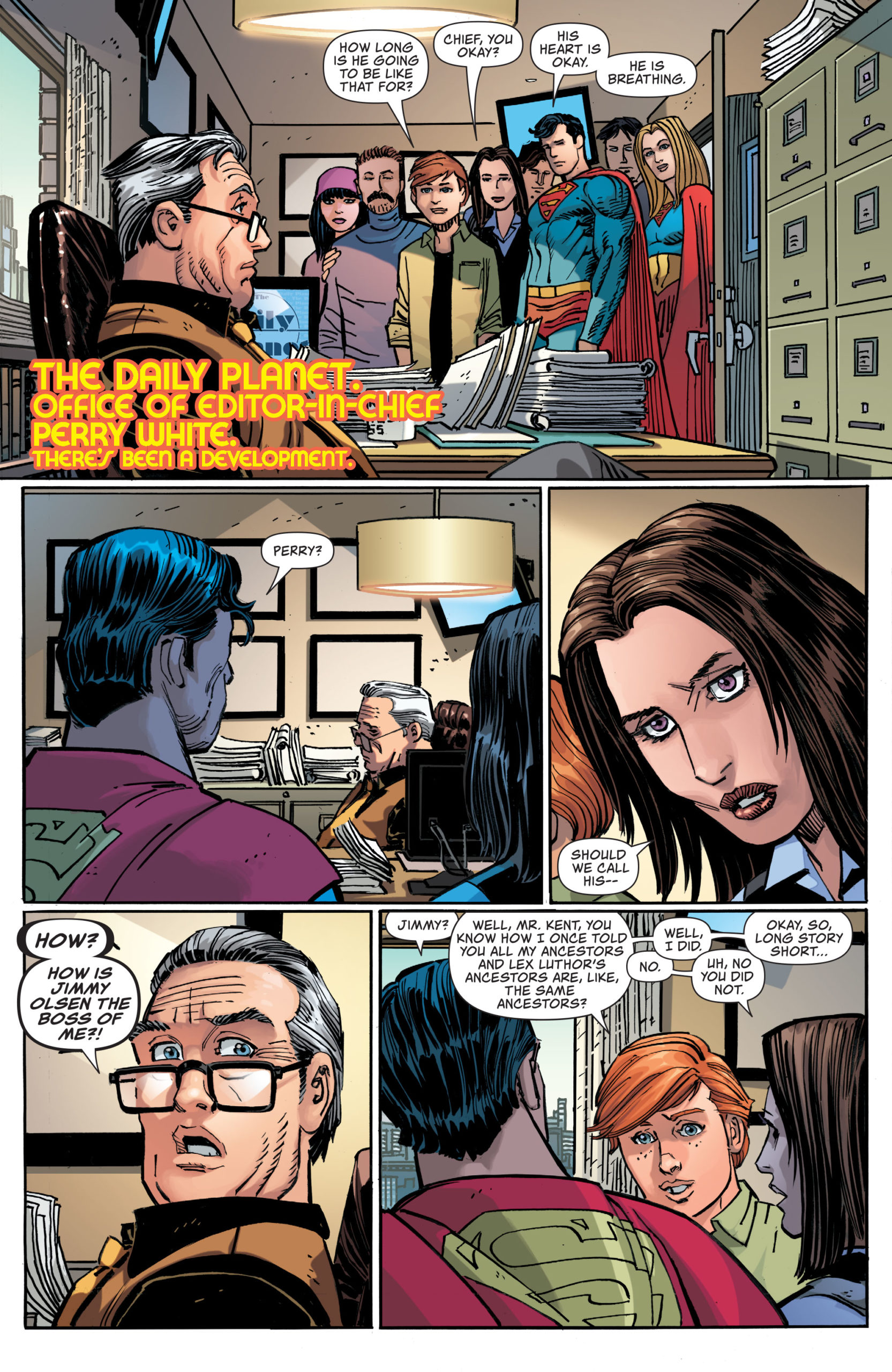 For fans of Conner Kent, “The House of Kent,” is a great moment as this fan-favorite character as his return back into the fold is completed.  This issue sees Mister Terrific and the Atom weigh in on what’s going on with him.  There’s a scientific assessment of his health and the acknowledgement of the multiversal forces that have impacted Clark’s memory of Conner.  It’s an enjoyable moment as Bendis builds rather than destroys.  There’s still the questionable decision to bring back the leather jacket look in lieu of the black T-Shirt.   I suppose there’s also a question of exactly where this fits into Conner’s previous continuity as he appears to be younger than when we last saw him, pre-Flashpoint.  It makes one wonder where exactly Conner is in his timeline.

For much of the issue, Clark and Jon patrol Metropolis looking for Super-saves reminiscent of the sequence in Superman: The Movie.  The best part is the slice of life aspect and the opportunity for father and son to spend quality time together.  It’s a genuinely enjoyable part of the comic, even if it is reliant on the still terrible idea of aging up Jon and eliminating all the story potential of seeing Superman and Lois raise a child together.  It’s ironic that Superman even seems to acknowledge it in the story itself when Jon says that today “almost made up” for their lost time and Superman responds “not even close.”  No S#!+, Bendis. 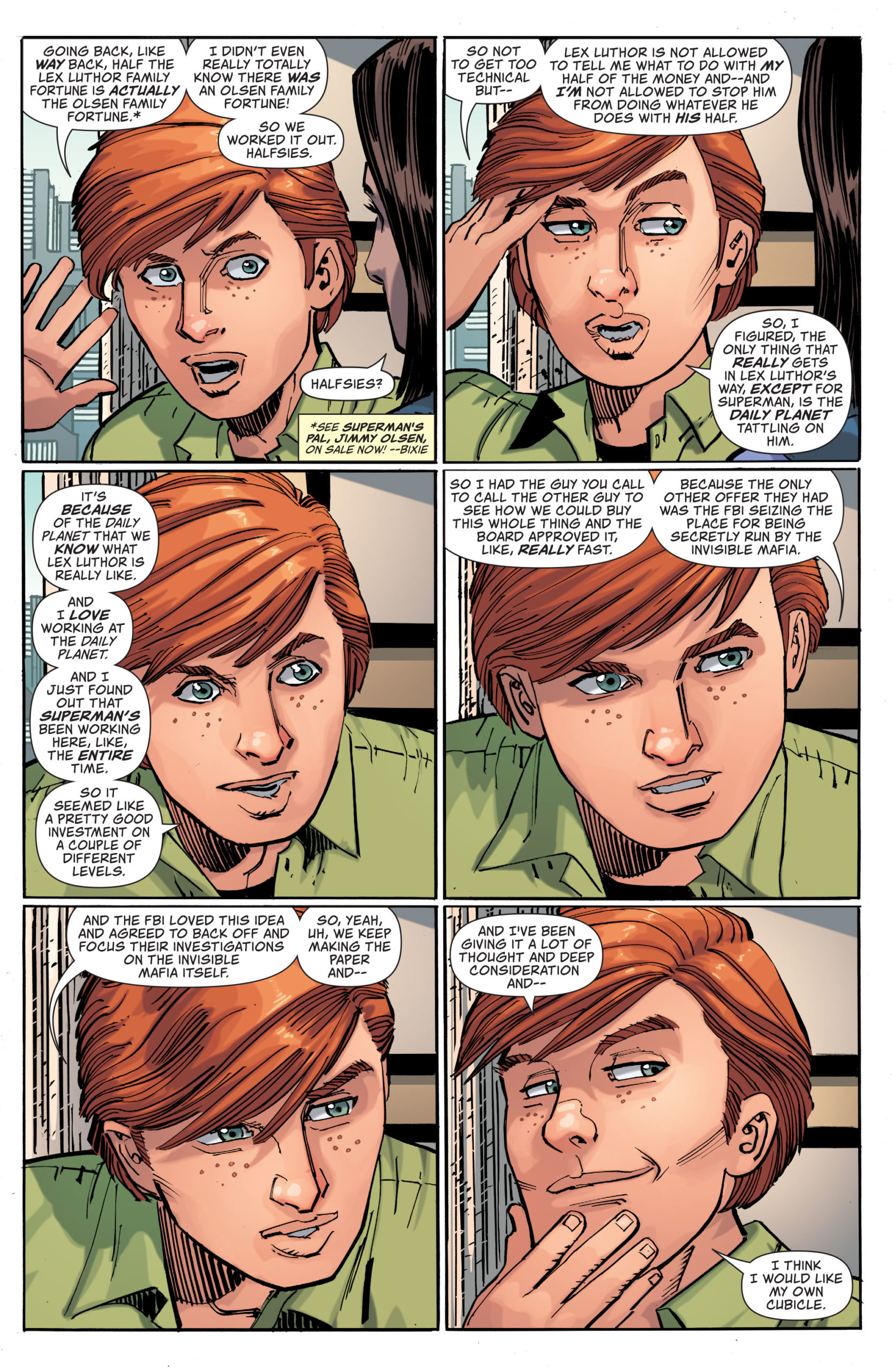 Bendis on some level seems to understand the storytelling potential he’s eliminated, so it is even more confounding that he decided to do it.  This is also echoed in one of the Super-saves.  A by-stander says to Jon, “Hey, you should team up with Robin, that’s all you should ever do,” indicates that Bendis also understands that his aging up of Jon has destroyed the wonderful Damian/Jon dynamic and all the story telling potential there as well.  Although, a new SuperSons digital first series has recently launched.

Lastly, there is a nice sequence with Clark, Bruce, Jon and Damian.  While there’s nothing earth shattering, it’s notable that this is not reminiscent of the entire run, rather this type of interaction was desperately needed throughout it.

This issue is indicative of Bendis’s run.  The conclusion exposes a lot of his weaknesses as a writer.  Firstly, the whole “Jimmy Olsen owns the Daily Planet” was revealed back in Superman’s Pal Jimmy Olsen #12.  It’s not the first time that Bendis has spoiled his own reveal in an earlier issue.  It just has no impact.  Readers have known this for six months.  Yawn.  While there may be story potential, in Action Comics #1028 it’s just the McGuffin that returns creative direction of the Daily Planet to Perry White.  While it’s clearly intended to be a “cool misdirection” it just comes off as lame plotting and planning. 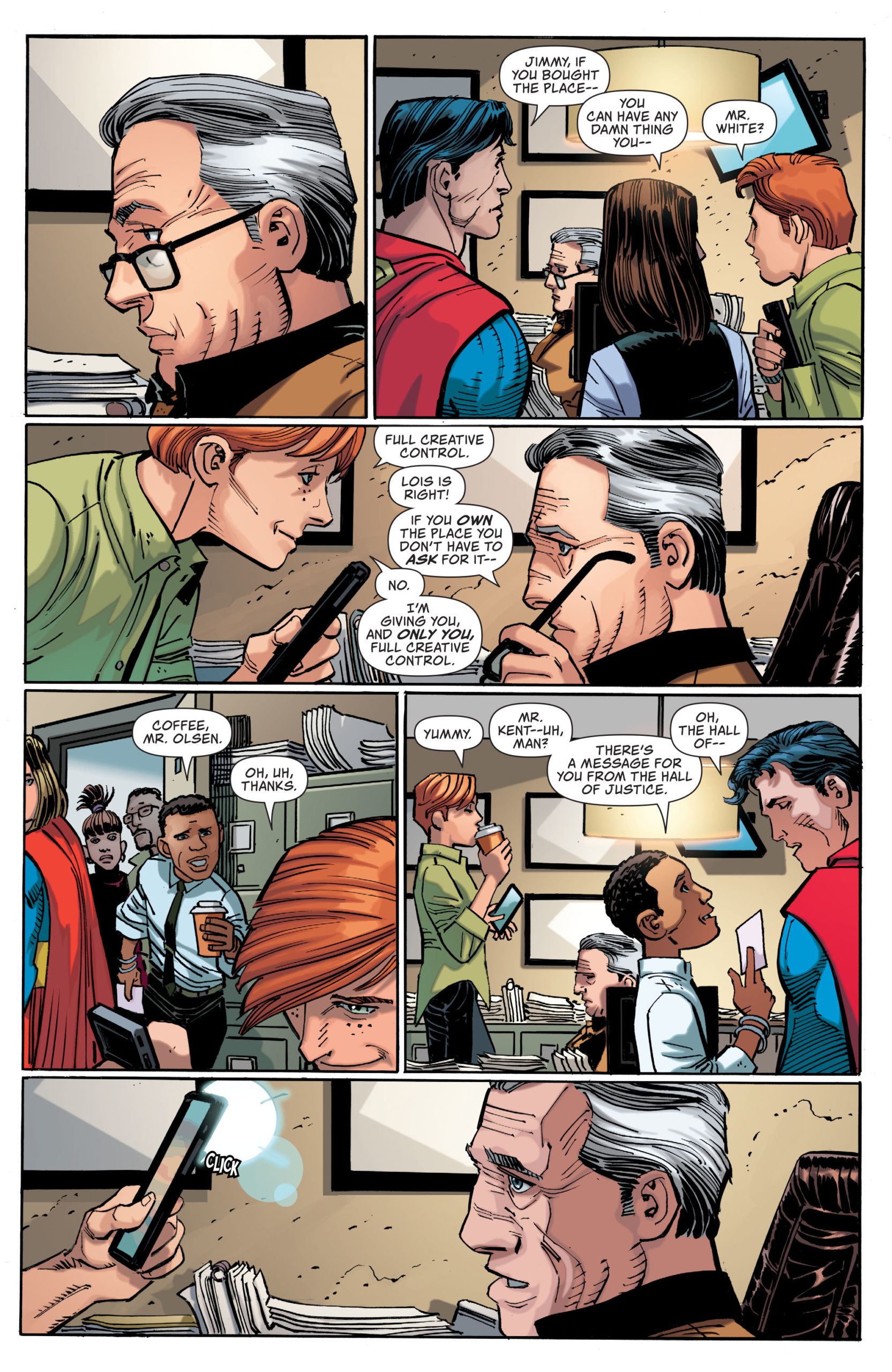 This leads into the lack of exploration of Leone’s accusation of Lois being from an alternate Earth.  While story wise it works fine as simple misdirection from Leone, it seems to go against Lois’s portrayal in Action Comics #1004 when she returns to Earth.  It seemed in that issue that Bendis was laying the seeds for something more significant with Lois’s out of character dialogue and mysterious book she was writing- a book  that indicated the world knew she was married to Superman.  This lack of resolution just makes these early issues look like bad writing.  I suppose I shouldn’t be surprised, because the only interesting thing about Bendis’s run was the Invisible Mafia.  The rest of the content has ranged from questionable to terrible.  And at no point has his execution been anything better than poor.

It should come as no surprise that Action Comics #1028 is another failure in execution.  Bendis is unable to make the plot interesting or get the reader to have a really good “YES!” moment.  The character bits as mentioned above are good, but they don’t push things way over the top.  There’s plenty of disappointment, as well.

The biggest has to be that Bendis has broken so many toys in an unsatisfying way.  We got an identity reveal that is completely and utterly boring and uninspiring.  We got Jon aged up with no pay-off that satisfies for the lost potential of Superman and Lois raising a child.  Lois has had multiple “throwaway” moments- telling her Dad that Superman was Jon’s father, and what happened in space that made it so important to be evasive and deceptive upon her return to Earth?  Bad writing is bad writing.  While Bendis can manage to write some good scenes, his overall narrative is terrible, from content to execution.  He can’t get out of his own way because of his terrible ideas and find a way to resolve the ideas he presents or find a way to be inspiring. 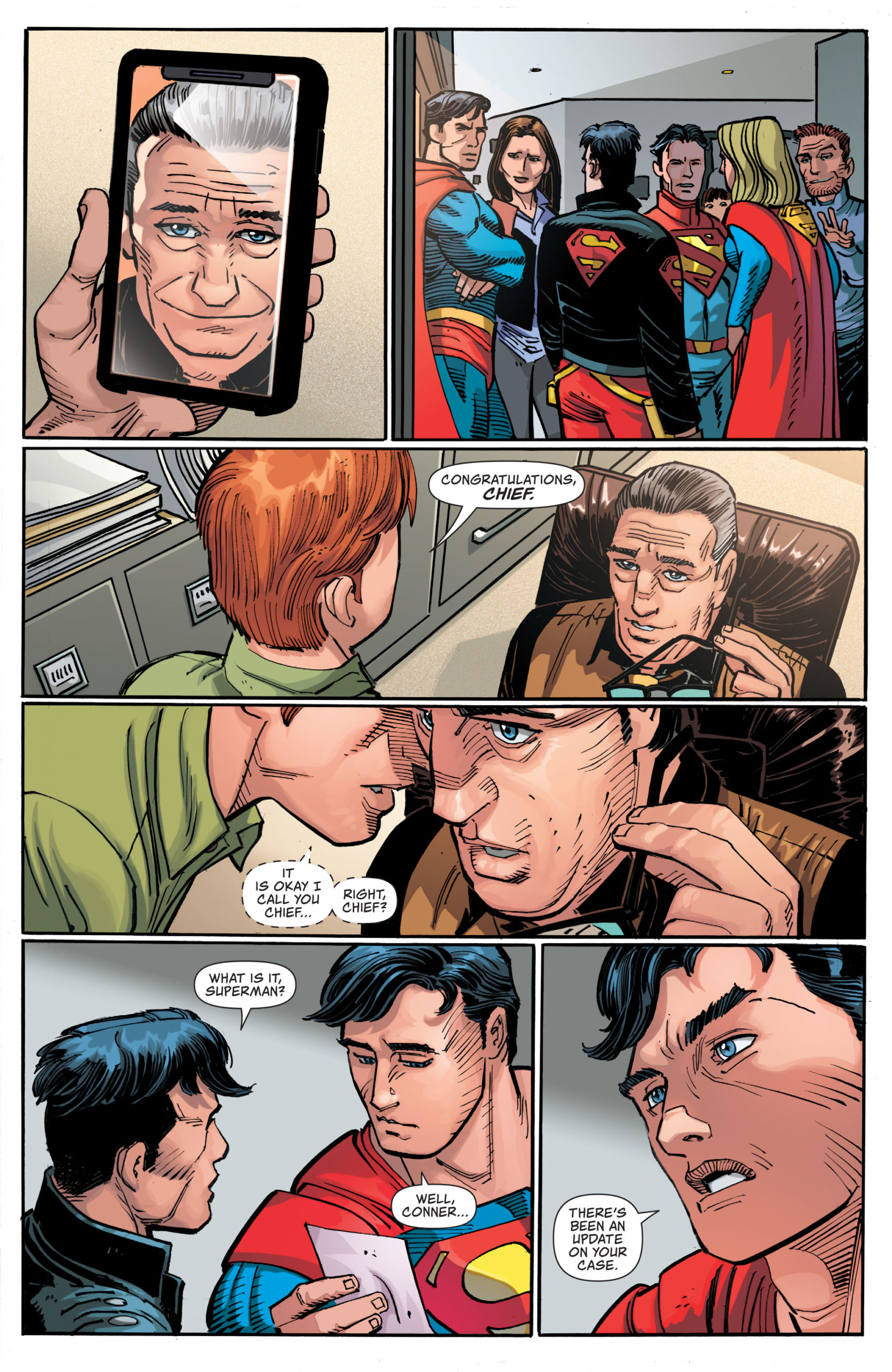 Action Comics #1028 slows things down to try and bring Bendis’s entire run to some sort of conclusion.  Unfortunately, despite some nice character moments that carry this issue, Action Comics #1028 is also a reminder of all of Bendis’s shortcomings as a writer.  It’s a real shame that DC let Bendis go unsupervised on their flagship character.  And, if he was actually supervised, that person should be fired.  There’s years of fixing in the works for Superman.  It’s like waking up form a nightmare only to realize that it was real.  I pity the subsequent writers who have to manage the baggage of Bendis’s terrible ideas.  This is the first time I’ve thought the idea of the “retcon” was a good thing.