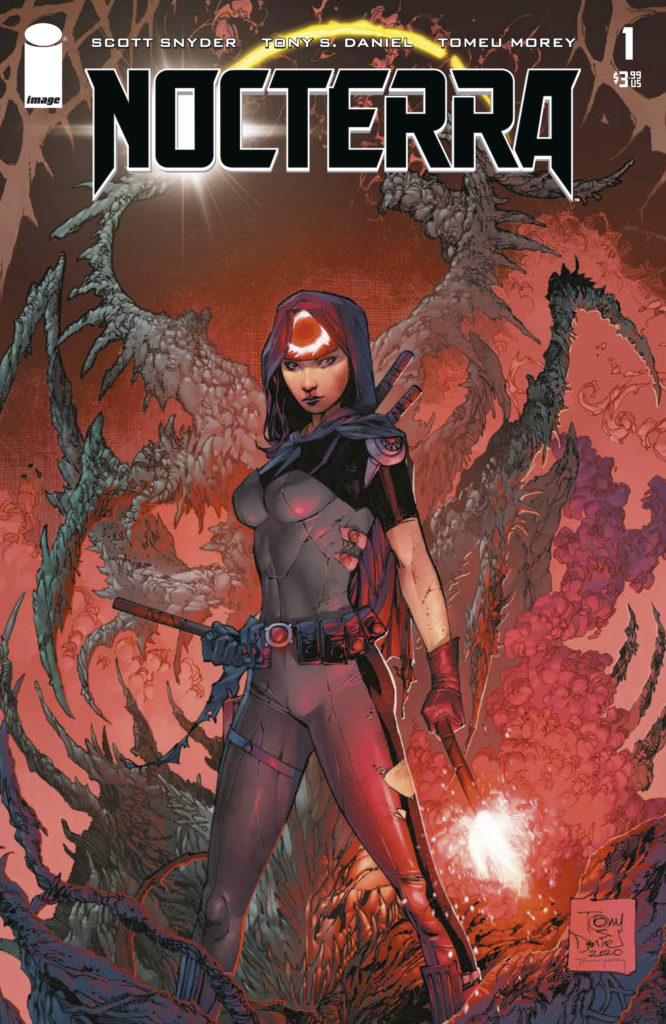 “Where were you on that morning?” – Valentina “VAl” Riggs…callname SunDog

“FULL THROTTLE DARK,” Part One-Ten years after the world is plunged into an everlasting night that turns all living creatures into monstrous shades, the only way to survive is to stay close to artificial light. 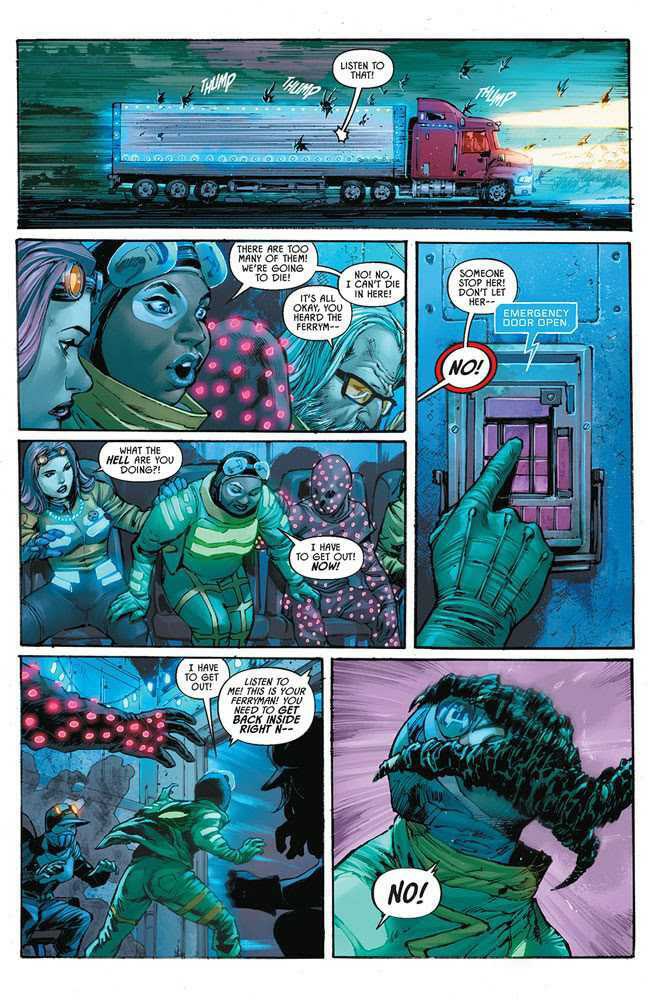 Where were you?  Scott Snyder plunges us into a scene from Red Dawn where kids are in school and then the lights literally go out.  Well…the main light!  Where we start is like a movie scene and then we get a quick fast forward.

How does a young Val Riggs who is riding in the back of her parents car with her adoptive brother Emory get to the point where she is a battle ready warrior driving an eighteen wheeler using tech tools her brother Emory developed?

That’s where we need Snyder to fill in the blanks as he sets a perfect reader trap for us.  How did this all happen?  His story telling sucks us in so fast, we cannot drink in the words nor the perfect frames Tony S. Daniel provides.

To provide details of this story would be a detriment to the surprises that await you in this issue.  However, the entire synopsis follows with as few a spoilers I can provide.

The Sun has gone out.  Val is a road warrior Ferrymen transporting people as well as goods from town to town that have lights.  She’s paid in battery chargers and the market for payment is something akin to Rey or Han Solo in the Star Wars movies. In fact, Val makes a pretty good combo of both of these characters.

Light is the new currency it appears and if you are out of the light for too long, you contract a sickness that could turn you into a creature of the night.  Plot twist here as you will see with Val and Emory.  Pay attention when you read!

Val is asked to transport an older man and his grandchild across some territory as the old man displays that he has a real sunburn and needs to get to this sanctuary.  Picture Ben and Luke trying to get Han to take them on a mission.

However, there is a villain that is on the pursuit and you have not seen anything like this before.  I’m fifty two years old and i have been reading comics a LONG time.  This is going to be one awesome ride! 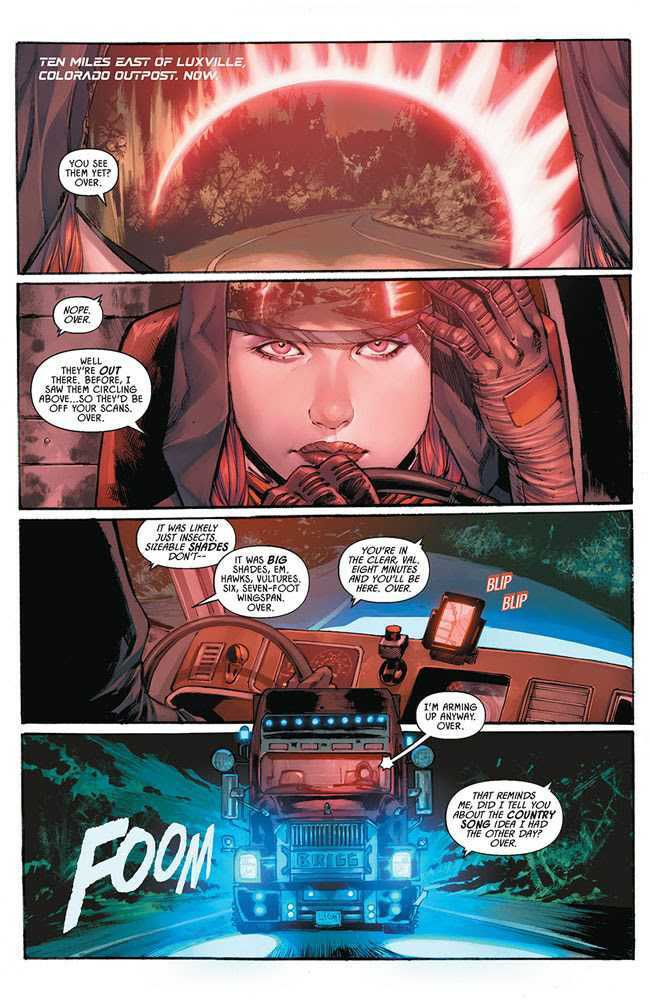 Tony S. Daniel!!!  If I could shout it any louder on the page I would.  When you look at the contributed frames in this article, let the sharp pens wash over you and check out those colors from AndWorld Designs.  Image Comics always does a great job in allowing their artists to be razor sharp in detail and his pencils are akin to Todd McFarlane’s and Greg Capullo’s.

There’s Not a Hotter Author Right Now Than Snyder

I immediately requested to cover this book as I “discovered” Snyder on a Batman run along with Greg Capullo.  His vision to detail rivals that of some of the best horror authors, namely Stephen King, as his work on Undiscovered Country is a bit of a playbook for 2020.

That being said, it was like discovering a minor league baseball player and watching him become Hall of Fame.  The same resonates  with Snyder.  True…every once in a while an issue may fall flat for anyone.  But Snyder’s imagination paired with Daniel’s pencils is blender for success.

You would do well to read this issue #1.  The villain they have created is not to be spoiled here.  I have never seen anything like this…nor would I want to for real! 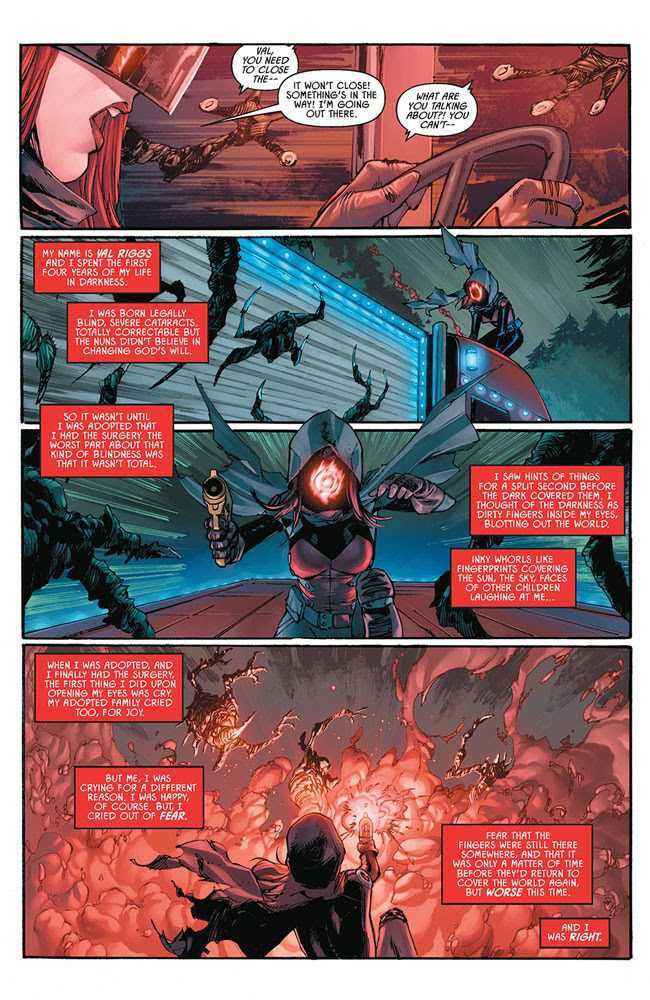 This is really picking hairs off a gnat’s legs because this book is just so great!  The entire removing of a vital “given” from the world such as the sun, moon, etc. has been done before.  While Superman can venture into a Red Sun and have its implication or gravity can be removed in Skyward where everyone has to be weighted down, I cannot recall where the world has been cast into darkness for so long.  Again, not a huge negative at all.

Instead of Snyder’s Undiscovered Country virus, he has now removed the Sun!  Wow!  It’s interesting that the world is not in an Ice Age, but I am sure he has answers for that as he is thorough in all that he does.

The transformation of humans into these nocturnal creatures are reminiscent of I AM LEGEND, that Will Smith movie that was really a stellar piece of work!

It’s only natural that Snyder take pieces from pop art and place them into his books.  Tony Daniel’s Val looks a bit like a Lady Shiva or a Katana from DC comics. 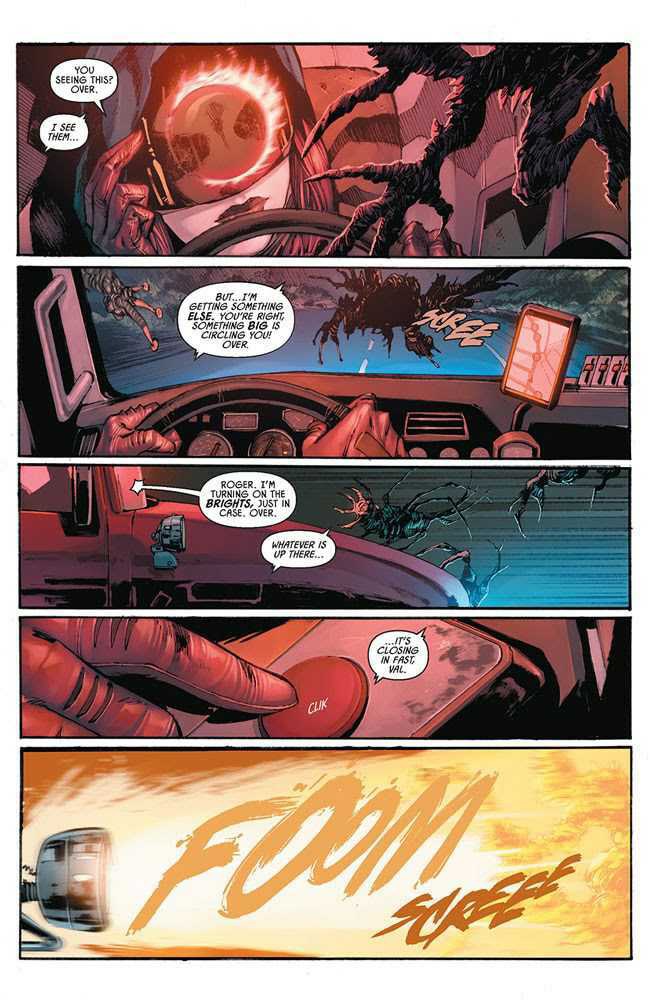 BUY THIS BOOK!  For those lucky enough to get on the ground floor of anything that Scott Snyder does, he’s one of the hottest authors the past few years.  I am not sure how his imaginative faucet gets turned on, but I hope he has a run that rivals that of Stephen King!  With Tony S. Daniel on art, you can’t go wrong.  What he did with Batman in Detective Comics is simply art at its finest…gallery worthy stuff!  This combination of author and artist is what people in comics thought of when they put Batman and Superman together for the first time….Mind Blown!