While Oliver and Felicity try to focus on resolving the conflict with William, Team Arrow deals with a stalker who not only turns out to be a reemerged serial killer, but one with a connection to Oliver.

Kevin Smith must be smiling right now somewhere. More on that later. 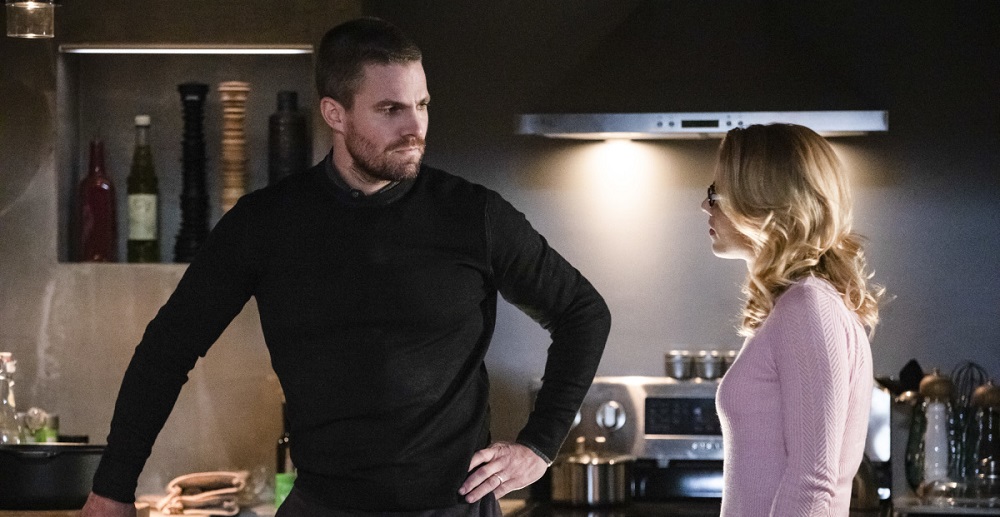 This installment focused on the reality of being a superhero with a family and tested Oliver’s ability to flow with change. William is not only back, but carrying baggage. Expelled from boarding school for fighting and lied about it for months, it’s safe to say that he takes after Ollie in many ways. As a parent himself, I can only imagine how Stephen must have felt portraying Oliver as frustrated and argumentative with his son when a discussion goes south. Stephen and Jack Moore have great onscreen chemistry together, and seeing them argue reminds you of how far they’ve come from their initial encounters on The Flash. Up until this point, Oliver has approached the role of fatherhood with patience and self-discipline. This is the first time we’ve seen him really lose his temper with William. Adolescence does make the job more interesting to say the least. The presence of The Star City Slayer targeting outed vigilantes, and the revelation that William’s grandparents want to take custody, remind Oliver of both the dangers of his life and how not everyone is onboard with how he’s raising his son. In Samantha’s parents’ eyes, from a logical standpoint, they’re right. Both Oliver and Felicity have made serious mistakes with William, and the world they operate in is very dangerous. They don’t have government jobs like Diggle and Lyla, who can afford more than just a fancy security system. In the end, however, the writers did a good job in having William show maturity in the final conversation and again more growth for Oliver on the subject of choice. Oliver doesn’t want to see William unhappy or endangered again, and his son, in turn, doesn’t want his father to give up the role of Green Arrow. The compromise works and it again links up Oliver’s world with Barry’s given William is headed back to Central City. 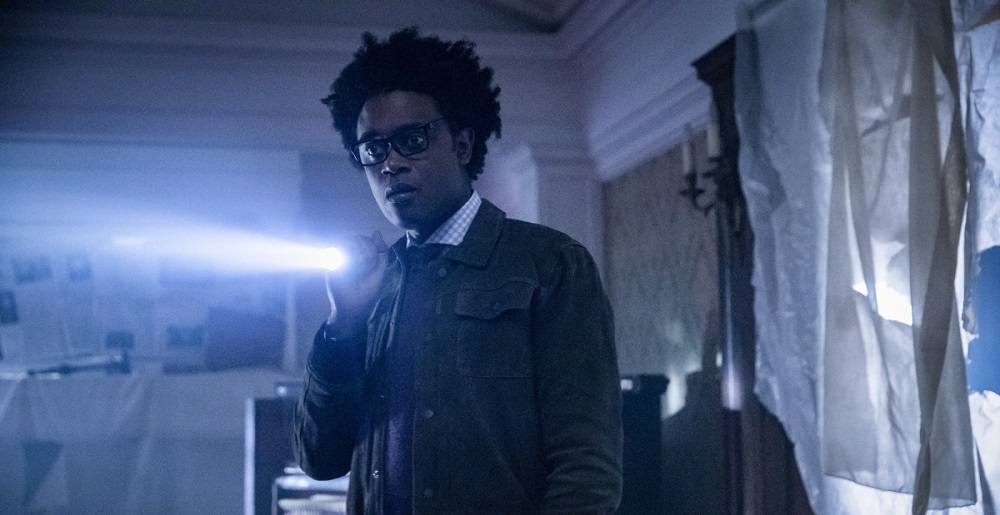 Speaking of possible departures, it appears that Mr. Terrific is headed for greener pastures. This is a left field maneuver considering how he was prepared to hold Diggle’s feet to the fire on the Ghost initiative aka Arrowverse Suicide Squad. Despite his shining moments this season, the writers haven’t really figured out what to do with Curtis if he wasn’t active in vigilantism and content with being a tech developer. However the situation did reveal that Diggle does value his presence and was willing to move heaven and earth to keep Curtis at A.R.G.U.S.. Even the notion of him booting out whoever was in charge of tech development to make Curtis their new Q would’ve made a good villain origin. The fact that the writers have him prepping to sign over his rights to his and Felicity’s Helix project hints at the possibility of removing Mr. Terrific from the board, only to be confirmed by Kellum himself 24 hours later. 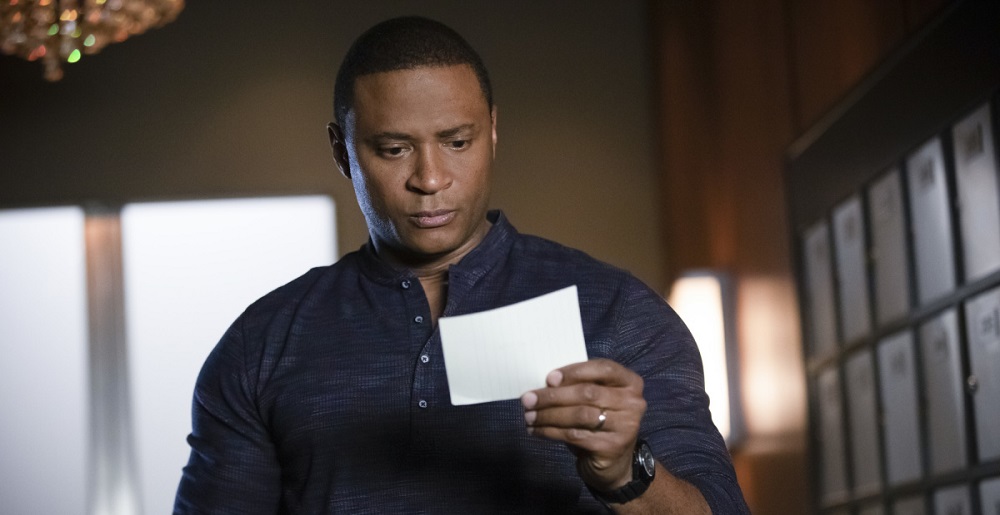 Now on to the big bad and the reason for Kevin Smith’s smile. Brendan Fletcher made his inevitable return as Stan from Slabside, better known as The Star City Slayer. Comic fans recognize Stan and his alter-ego from Kevin Smith’s inaugural run on the Green Arrow comic entitled “Quiver.” Although that Slayer was tapping into supernatural, the premise of his appearing a seeming supporting cast member to Oliver only to reveal he is a predator was brilliantly retained and given greater depth. The writers were smart in keeping him concealed as a nameless threat making his presence known through those notes to Team Arrow. His use of a magnesium-based anesthetic as a weapon was extremely clever and provided enough reason for the Queen family to stay in their seats during his monologue. Fletcher is allowed to unleash the full psychosis that Stan has been holding in check from the premiere. Between his confession to parental abuse and murdering his family, and Diggle’s description of his psychological profile after the fact, Star City Slayer left his mark on both the Queen family and Team Arrow, in particular Dinah. 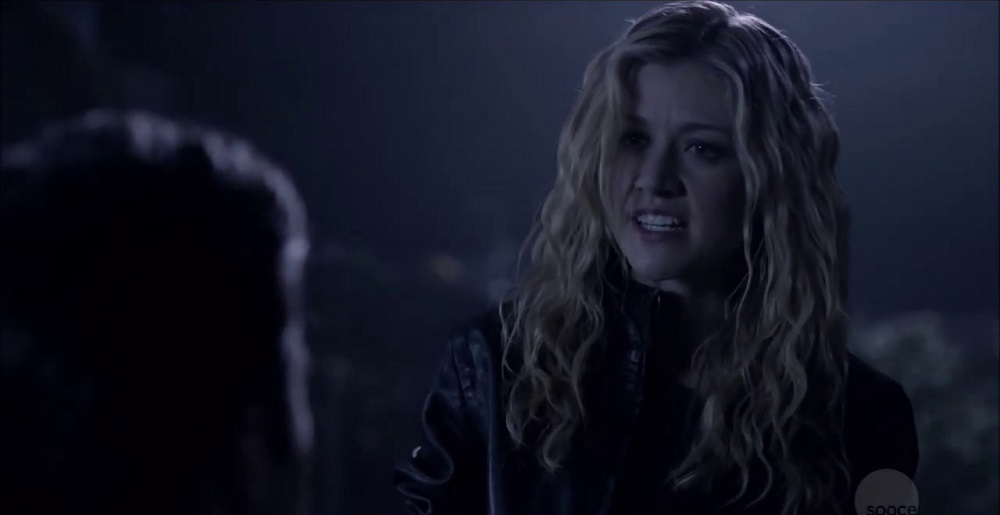 This episode’s additional strength is linking the present to the Flash-forward sequences through two significant developments. Future Dinah’s Black Canary doesn’t have a Canary Cry and has a massive scar across her neck. Who knew that it would be Stan’s blade that would silence this pretty bird forever? I, personally, shouted “NO!” when this happened because it was such a shock that the future would come this quick. In retrospect, the entire episode seemed to be leading her towards this: Dinah dealing with the fallout from her revealing her powers, a cameo from The Flash‘s Captain Singh as a nod to her past, and finally finding herself at the end of Stan’s blade. It will be interesting seeing how Dinah will initially cope with the loss of her metahuman power, and the foundation laid that leads her to being a full-time vigilante in the future. Then there is the biggest shocker this week: Mia Smoak. Jaw dropping. Katherine McNamara’s Darkstar is given relevance and a much larger role besides hanging out with Diggle’s son Connor Hawke, a name which Dinah and Roy know. It was smart casting from a visual standpoint because Katherine resembles Emily and Stephen. So now – with Roy, Dinah, Zoe, William, Connor, and Mia – the writing team is presenting us with the formation of Team Arrow 3.0? In the bunker no less? Given Connor Hawke isn’t The Green Arrow, could this be the beginning? Connor Hawke is the name – as revealed in the season one episode from DC’s Legends of Tomorrow – that John Diggle Jr. takes out of shame for not saving his father’s life. Even though that timeline may have been averted, that world was not explored to its fullest. Given that Mia had no idea who William was, and this revelation layered against the news that Felicity received from the doctor, leaves one to wonder if he ever really came back to Star City.

The grandparents angle feels really like a maguffin, or a curve ball thrown in for plot purposes. The equivalent of a whacky uncle brought in for laughs on a sitcom. William’s been through kidnappings, home invasions, attempts on his life, so where the hell have they been for the past few seasons? Why didn’t they bring them in last season when William’s mother was lost? Although this makes more sense than William calling child protective services to get removed or get emancipated, I just feel that this was forced and unnecessary. 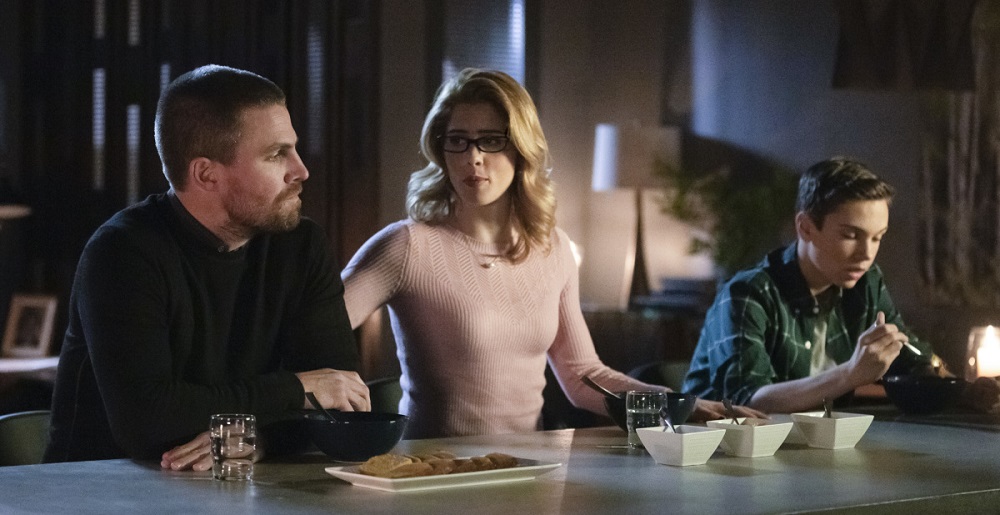 Good character development and plot points finally synching up the present and future events were the backbone of this episode. Star City Slayer unleashed was perfectly executed and tied off an important subplot that I feared the writers wouldn’t take advantage of. The pacing was perfect. Also cool Denny O’Neil nod by bringing in Oliver’s Five Alarm Chili. Great curveball with Mia Smoak. What brought down the rating was, again, the grandparent factor. While a fight that Oliver nor any parent could win, the introduction of the grandparents could have been done a few seasons ago so there was some greater weight when Oliver opened the door. Like I said, it’s a maguffin that didn’t have to exist. Regardless, this was a great episode and leaves the viewers with questions as it should. See you guys next week.