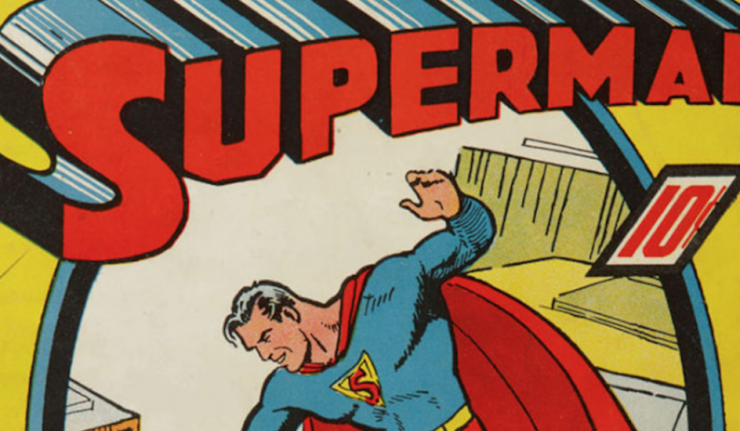 If you’ve ever had the dream of owning every comic DC has published — which currently number more than 40,000 — then get ready for a great opportunity. Sotheby’s auction house will be selling the “Ian Levine Collection,” which contains a copy of the publisher’s entire output from 1934-2016.

With the current rise of Facsimile Editions, more fans have had the opportunity to get a taste of comics history. Click over to Sotheby’s to look at the whole auction catalog of what’s sure to be a record-breaking sale price. The auction record for a comic was achieved in 2014 when Action Comics #1 alone sold for $3.2 million back in 2014; Detective Comics #27 hit $1.075 million in 2010.

Sotheby’s is pleased to announce that we will offer DC Complete: The Ian Levine Collection, an exclusive private sale offering of every comic book released by American publisher DC Comics from 1935 – 2016, including complete runs of Superman, Batman, Action Comics, and Detective Comics. The more than 40,000 comics in the collection also features superhero icons Wonder Woman, The Flash, Green Hornet and Aquaman, as well as the Justice League series. Available now and on view on Sothebys.com, the sale marks the 81st anniversary of the release of Detective Comics #27 on March 30, 1939, which featured the debut of The Batman. For a comprehensive overview of the collection or to inquire about its purchase, visit here.

The Ian Levine Collection of DC Comics – the most comprehensive in the 80 year span – was amassed over half a century that spans the birth and development of superhero comics as cheap forms of entertainment to pop culture juggernauts. From New Fun #1, the very first DC comic book published in 1934, to complete collections of Superman and Batman, the collections also includes first appearances of Wonder Woman, Aquaman, Green Lantern, the Flash, Martian Manhunter, Plastic Man and more; superhero teams such as the Justice League of America and the Teen Titans; and supervillains Lex Luthor, the Joker, Two Face, the Penguin, General Zod, and more.

Richard Austin, Head of Sotheby’s Books & Manuscripts Department in New York, commented: “The Ian Levine Collection is the holy grail for comics collectors. Amassed over decades of hunting, Levine’s collection embodies the passion and fandom that has defined comics culture for generations, which today is best encapsulated not through printed issues but popular superhero films that regularly break box office records. Featuring some of the most valuable individual books as well as extremely rare promotional issues, the Levine Collection includes all the DC heroes that are among the most recognizable and versatile pop culture touchstones in the world.”

A  significant figure in modern pop culture himself, Levine is a DJ and producer, early popularizer of the Northern Soul movement, and one of the originators of Hi-NRG music. He was first introduced to DC when he began reading The Justice League of America as an eight-year-old in 1960. Upon discovering London comic shops Dark They Were and Golden Eyed in 1972, Levine realized it was possible to find long-out-of-print issues and discontinued titles such as The Justice Society of America, a Golden Age forerunner of his beloved Justice League, thus sparking his half-century of comic book collecting.

For a decade, Levine purchased a new copy of every DC issue he could find, while trying to fill in earlier issues. However, in pre-internet 1987, Levine despaired of finding many Golden Age comics he lacked, and decided to sell many of his best issues in order to fund his collection of Northern Soul records and Doctor Who film prints. However, reviewing his stacks of comic books with the purchaser reawakened his passion for this pop art form, and Levine bought his comics back from the dealer he had sold them to—at a 50% premium. Amassing about half of the comics DC had ever published, Levine determined to form a complete collection. Sacrificing his incomparable collection of Northern Soul records and Doctor Who prints, along with the assistance of the nascent internet (including the discussion forums of Certified Guaranty Comic, a comic book grading service) and dealer, advisor, and author of The Comic Book Paul Sassienie, he achieved this ambition, which would essentially be impossible to replicate. In 2010, Levine’s paramount, unique collection was utilized to supply the illustrations for Taschen’s monumental publication 75 Years of DC Comics: The Art of Modern Mythmaking by Paul Levitz, the former president and publisher of DC.

The collection spans the nine decades tracing the trajectory of the effect of comics on popular culture, from the target of a congressional investigation of their corrupting influence to the topic of doctoral dissertations addressing issues like war propaganda, environmentalism, and gender identity. Every comic genre published by DC is included, such as humor, parody, romance, crime, science fiction, and adaptations of classic and popular works of literature and film. The work of successive generations of the greatest comic book artists and writers are preserved in the collection, from pioneers such as Jerry Siegel, Joseph Schuster and Jack “King” Kirby; to those who maintained the quality and passion of the books through the Silver Age including C. C. Beck, William Moulton Marston, and Sheldon Mayer; to those who carried on the tradition through the Bronze Age and into the twenty-first century such as Neal Adams and Curt Swan.

Although National Allied Publications, DC’s predecessor firm, had been publishing comics since autumn 1934 with New Fun: The Big Comic Magazine #1, Superman’s debut in Action Comics #1 (June 1938), sparked a new era not only in comic books but in global pop culture, with superheroes exerting enormous influence on film, television, and fashion. Superman was soon joined by a radically different superhero than the alien man of steel, but equally as significant and influential: Batman (originally, the Bat-Man), who first appeared in Detective Comics #27 (May 1939). Shortly after, National Allied Publications adopted the initials of this popular title for the company brand that is still recognized the world over: DC. Representing the pinnacle of the Golden Age of comics, these two seminal characters would soon be joined by an expanding roster of several hundred celebrated superheroes and serialized stories.