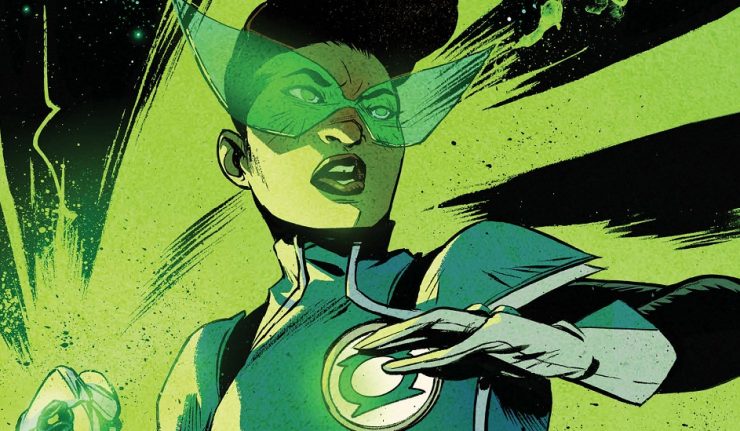 Jo and Councilor Marth have a long discussion about the nature of Emotion Exploit, Switchoff and the importance of emotions in the lives of sentient beings.  While it may sound like a futuristic BBC program, it elevates the IQ of this book to another level.

As an exploration of emotion, Far Sector #6 works particularly well as Jemisin is able to use Marth as the “test subject” and Jo as the control as the two discuss how emotion has affected their respective lives.  Marth has been using Switchoff periodically and he realizes how much he enjoys emotional experiences.  He takes this time to reflect on his decisions which are always made while under the influence of Emotional Exploit, the emotional inhibitor required to be taken by all inhabitants of City Enduring.

This plot element provides Jo and Marth to discuss emotion in a way that’s unique.  People can’t switch emotions on and off, though they can sometimes try.  In Far Sector, Jemisin presents a society that has figured out how to do it chemically.  It allows emotions to be examined in a different way.  What’s particularly fascinating is that it automatically invites the reader to begin thinking about one’s own emotions and their affects on one’s own decision making.

Jo’s ruminating on the recent rioting and police action in the opening pages of this issue resonate eerily with the events that are transpiring in the United States as I write this review.  Many cities are under a curfew, including my own as of this very evening.  While Jemisin wrote the issue well in advance of the most recent events, it’s not a singular incident and it’s something that’s been building for years.  Great science fiction allows a writer to address contemporary topics through a lens of fiction.  It’s remarkable at how relevant the opening sequence is for the events of this week.

It’s been a theme throughout Far Sector and it comes to an interesting plot point in this issue as Marth is compared directly with human leaders and their differences in self-assessment.  It’s a powerful moment as Marth explains to Jo why he’s stepping down after the forthcoming referendum on Emotion Exploit.

Some readers may find this slow down issue a bit of a drudge because there’s not a lot of plot development.  However, would counter that the intellectual nature of the issue which triggers some self exploration is leaps and bound ahead of a simple fast-paced mystery plot.  Far Sector #6 won’t be for everyone, but it certainly should appeal to the more sensitive reader for which the Young Animal line has been aimed.  (Yes, Far Sector still appears under the Young Animal imprint!  Thank you Gerard Way!)

The only real negative for me is Jo giving in to her emotions in the heat of the moment and sleeping with Councillor Marth.  She seems to be aware that it’s a bad idea before it happens, but does it anyway.  While it’s not hard to see how this plays into the larger theme of the affect of emotions on an individual, at the same time it comes off as cliched and detrimental to Jo’s character.  It seems like this would’ve been the perfect opportunity to show how Jo has grown and doesn’t make the poor decision in this situation.  It’s especially bewildering since the issue even references Jo’s previous mistakes in the form of a brief flashback.

Far Sector #6 is powerful issue.  It develops some of the themes that have run through the entire series in a deeper way.  Despite Jo’s questionable decision to give in to her emotions, the exploration of emotions is smart and insightful.  Every issue can’t be like this, but it’s great when it happens.  The release of this issue coincides with a pivotal moment of civil unrest as well, amplifying the impact even more so.