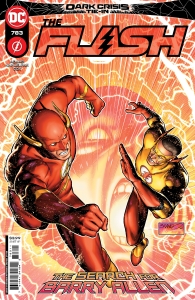 The Flash #783: A Dark Crisis tie-in: the search for Barry Allen! With the Justice League gone, Wally gathers the entire Flash Family in a desperate attempt to search the Speed Force and finally locate the missing Barry Allen. The question is, does Barry want to be found? This three-issue story ties directly into this summer’s event. Dark Crisis continues here!

The story in The Flash #783 centers on the Flash family’s efforts to locate and rescue Barry Allen. Readers know from the events of Infinite Frontier and Justice League Incarnate that Barry is on another Earth outside the DC Multiverse. This universe, called Earth-Flash.1, which appears to be an idealized world designed to keep Barry from wanting to leave.

However, Wally and the others don’t know any of this. They just know that their friend and mentor is missing somewhere in the Omniverse. Luckily, Mister Terrific has found a way to track his Speed Force signature. So, they split into teams to track three possible signals.

We see glimpses of two alternate Earths, possibly Elseworlds or hypertime realities. One appears to be a Mad Max-inspired world while the other looks like it might be a world where Barry’s counterpart is an amalgam of the Flash and Batman. We see a building labeled Allen Tower and an ad mentioning Allen Tech. We also catch a glimpse of a Batman-like character, but with a lightning symbol on his chest.

Things don’t go entirely as planned, due to Irey’s Impulsive nature. She pulls Jai with her into the Speed Force portal, with Jay Garrick following closely behind. Max Mercury and Jessie Quick track another signal, with Wally and Kid Flash following the third signal. While understandably worried about his children, Wally does recognize that “Those kids are smart and capable, just like their mom”. Jay following after them is also reassuring. 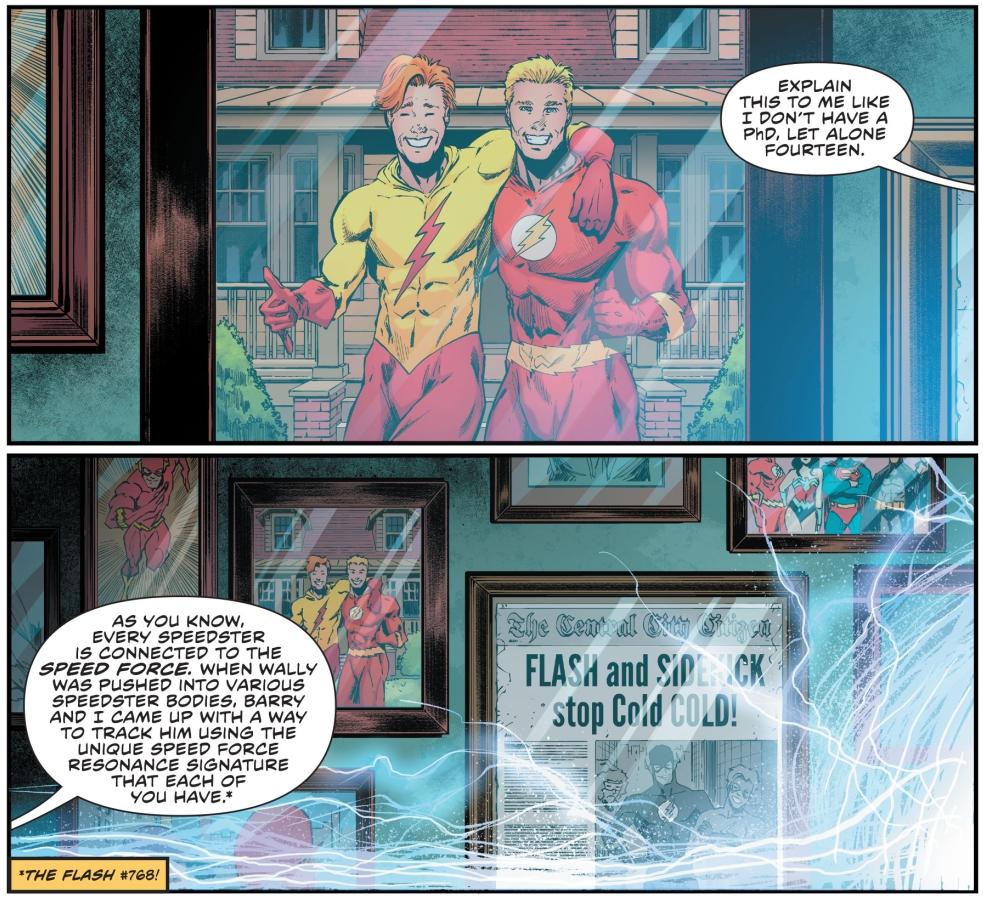 The story starts off on a dramatic note with Barry fighting the Reverse-Flash, perhaps about to kill him. Then it immediately cuts to 24 hours earlier. Adams is telling us that Eobard Thawne is soon about to enter the story and will turn Barry’s paradise upside down. With Barry, it always seems to come down to Thawne’s vendetta against him, but we’re left wondering how Thawne factors into this story and into the larger Dark Crisis story overall.

I did notice something intriguing about the fantasy Barry is living on Earth-Flash.1. In this life, Barry is married to Iris, with two young twin children. While the children are a nice reference to their yet unborn children, Dawn and Don Allen (a.k.a. the Tornado Twins), I also noticed something else. Barry’s ideal life is very similar to Wally’s actual life. Could Barry actually be jealous of Wally on some level?

I quite like Amancay Nahuelpan’s artwork, assisted by Jeromy Cox’s colors, in this issue. I especially like the care put into the realization of Earth-Flash.1. The use of Ben-Day dots gives Barry’s world a Silver-Age feel. Also, there is very little evidence in the way of technology that could pin this world to a specific time. This world is illustrated with a reduction of detail that reflects Barry’s early comic adventures as well as giving a feeling of unreality. For example, we see detailed photos and clippings on display in the Speed Lab in the DCU, but the Allen family household appears to have empty picture frames hanging on the walls. 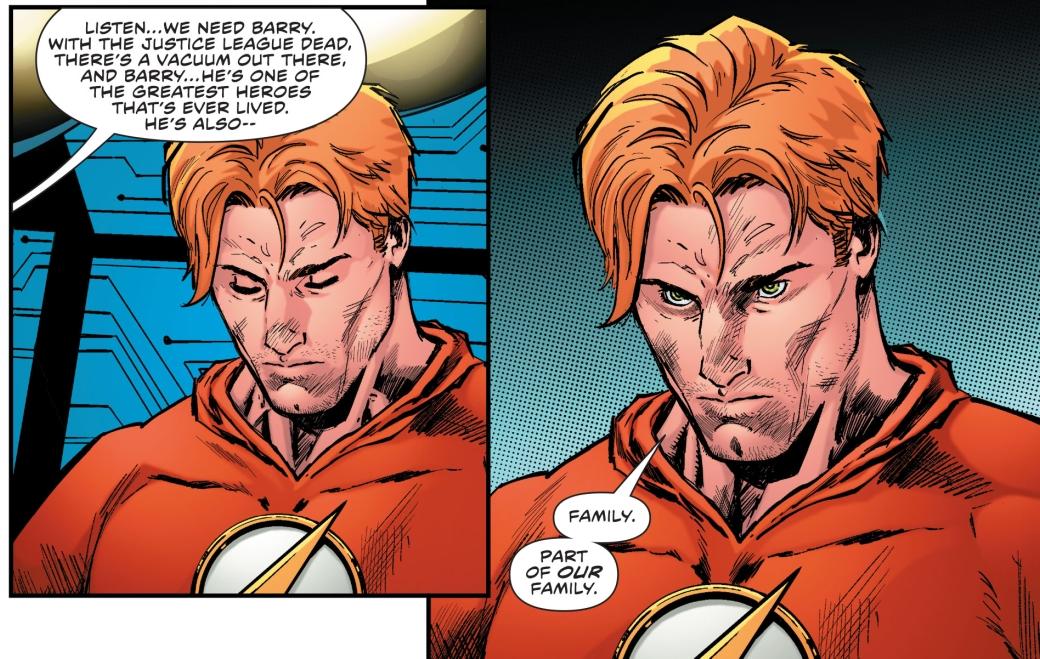 I like Jessie Quick’s costume redesign. Her status as a member of the family is clearly shown by the fact that she’s wearing a Flash symbol on her uniform. I don’t know if this was intentional, but her costume redesign could offer an explanation for a continuity problem introduced by Brian Michael Bendis in the Superman: Heroes #1 one-shot. That issue showed Barry with a young blonde lady in a Flash-inspired costume.

Bendis identified the character as “Iris West” on Twitter, but she didn’t appear to be anything like either Iris or Irey. Jessie’s costume, while not identical, is quite similar to the one shown in that one-shot. So, perhaps it was actually Jessie present in that story.

There are more interesting details about Wally’s doppelganger. Wally’s a redhead and has green eyes, which are accurately depicted in this story. The younger Wally who appears as Barry’s sidekick is shown to have brown hair and eyes. The hair can be explained as a callback to the fact that early appearances of Kid Flash had Wally dying his hair brown to protect his secret identity, but what does the different eye color signify? Given the attention to detail in this issue’s artwork, I doubt it’s merely a mistake. It has to be deliberate, but what does it mean?

Yes, this is an event tie-in story, and I know a lot of readers hate that, but it does avoid a lot of the pitfalls that often come with that. While reading the entire Dark Crisis event would likely enrich your understanding of the story, this story stands on its own, or at least it has so far. It’s not quite a retelling of the main Dark Crisis story but just one that’s written from Wally’s viewpoint.

Unlike other event tie-in issues, the ones in this series were planned to dovetail with those of Dark Crisis. Thus, Adams wasn’t forced to shoehorn a Dark Crisis plotline into his own story, but rather, “The Search for Barry Allen” arises organically out of the tale Adams was already telling. 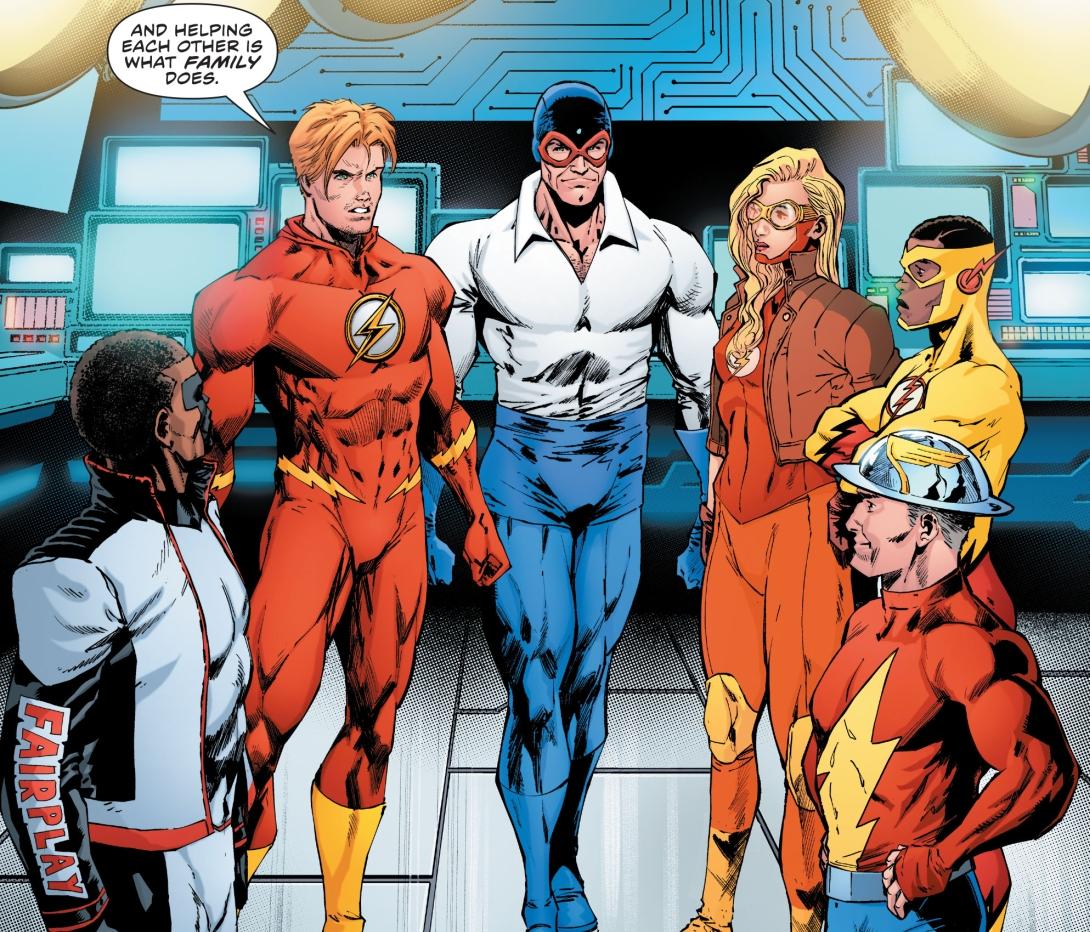 The Flash #738 is a perfect example of why the fastest man alive has always been one of my favorite heroes. I love science-fiction stories involving parallel universes, and the Flash has always been DC’s premier Multiversal traveler. So, I’ve been waiting to see Adams exploring that side of the character. If this opening chapter is any indication, then this story will be all that I’ve been hoping for.