Red Lanterns are the result of rage, from those who have suffered and lost precious things, they are anti-heroes instead of villains. Readers admire them and pity, especially when they see their heart wrenching stories (every time I think of Dex-Starr’s story I want to cry). And that’s part of what makes this series work, why it captivates readers.

In it’s run there have been a lot of changes, especially since writer Charles Soule took over. He has impressed me with his direction of splitting up the Red Lanterns pitting Atrocitus against former Green Lantern and new leader of the Red Lanterns, Guy Gardner. Both have different ideals on how to run the Red Lanterns an in an interview with Comic Vine, Charles Soule explains why the split happened.

“The basic thinking behind this was that Atrocitus had set up something he liked. It was a good feel for him. He was the high-priest, over-lord. No one could tell him how to do his job. It was his own, personal cult. He saw it as a religious calling to help the Earth through rage. Then Guy Gardner waltzes in and is like “whatever man. I’m going to beat you, steal your rings, steal your entire corps from under you and basically leave you for dead. Not only am I doing to do all that to you, but I’m also going to change your entire corps, which you created and own, and make it into this fun, free-willing, space-biker gang thing.”… Guy has built something and turned it into something of a family. He really likes these people and thinks something good can be done with them. Whereas Atrocitus feels like this is sacrilege left and right. This holy thing he made is being twisted and turned into something horrible. So you can see both sides of the coin and now it’s about putting them against each other and seeing who wins.”

What Soule says really does translate into his writing because each of the character now has their own personalities ringing through the series, and Guy really does make it fun. I’m one of the torn who love them all (especially Dex-Starr) and I want them to just call a truce already, do things their way but not be at a crazy war with one another. I just love them all.

However, readers are going to be seeing a showdown soon. With the arrival newest Red Lantern, the Judge, we see both teams racing to get to her first. As for a characters, it’s pretty cool because she sort of represents what both Atrocitus and Guy are doing and want to do with their teams. She is a symbol of justice who sees into a person and judges them without bias. That is the foundation of the Red Lanterns, and makes her appealing to both sides of the coin. It’s also what makes her dangerous to both sides. These are after all Red Lanterns and they are not as innocent as Supergirl was deemed.

Soule also revealed some tidbits about his Future’s End tie in issue. RED LANTERNS: FUTURE’S END #1 is going to tie-in directly with the “Atrocities” storyline that is ranging from Issue 32 – 34, including the annual. Guy Gardner is going to be a Blue Lantern pointing the Red Lanterns in the direction of building hope rather than fear and rage.

“The Lanterns are focused on hope more than, you know, rage or will or fear or any of the other emotions. And Guy is on a special mission related to hope that is directly related to Red Lanterns, though, that I think people are going to think is really cool.”

It’s pretty interesting idea that Soule is going to develop with the Future’s End tie in. As Red Lanterns have always been about seeking justice for all the horrible wrongs in the world, readers can see where he’s coming from with idea.

Overall, I prefer Guy as a Red Lantern, ever since the Blackest Night story arc, but I do like this idea that Soule has and it’s nice to have a peek and what he’s thinking of doing with his time on this series. 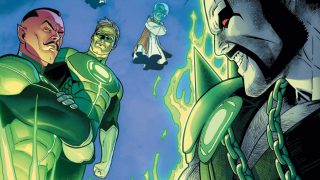 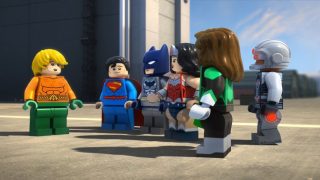