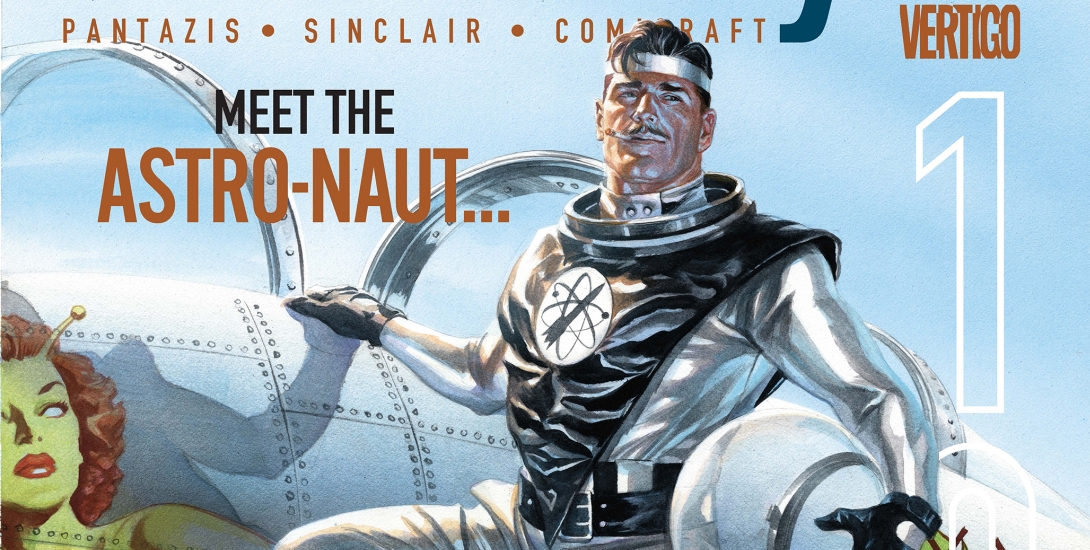 Summary
In this 100th special issue, we learn the story of the man Astro City was named for: Roy Virgil, the Astro-Naut. The story is told by Joseph Greenwald, who begins the tale in the city of Romeyn Falls.

Joe is a city councilman, and Romeyn Falls is in the grip of organized crime. The city cannot afford to hire enough police to deal with the high level of crime. There are a few masked mystery men fighting against the mobs, but the current mayor is distrustful of them.

Joe then tells us of Roy Virgil, a millionaire engineer and owner of a new aviation company in the city. However, he believes the future is beyond mere aviation, but in space travel. The press dub him “the Astro-Naut” and he earns the title when some mobsters try to take over his company and he fights them off with his technology.

Joe then introduces himself to Roy Virgil, convincing him to take up crime-fighting, and they form a mutually beneficial relationship. Joe helps with Roy’s business interests, and Roy helps forward Joe’s political career.

As the Astro-Naut’s career continues, he has numerous adventures in outer space, and he tells Joe of them. However, he also encounters the love of his life, the alien Xalzana, who he ended up getting separated from and never finding her again.

Roy also gives Joe a special lamp with a button that he can use to summon the Astro-Naut in times of need.

As the Astro-Naut’s legend grew, other heroes arose and Romeyn Falls become known as “home of the heroes.” The presence of heroes turned the city around, and Joe became mayor in 1942.

However, Joe started to notice a weariness developing in his friend Roy. Roy starts to tell him of a ruthless, warlike race called the Mrevani, but is too weary to tell the whole story.

About that time, the US government asks Roy to share his technology with them to aid in the war effort, but he turns them down. Around that time, various groups are encountering the ire of the general public for not being patriotic enough. When word of Roy Virgil’s refusal gets out, the public turns against the Astro-Naut, driving him into seclusion.

The US government hasn’t given up, and they ask Joe to help them get the Astro-Naut’s technological secrets. Stuck between his patriotism and his friendship with Roy, Joe struggles with his conscience, and finally leads the government agents to the Astro-Naut’s secret airfield outside the city.

While the feds searched for the Astro-Naut’s weapons and aircraft, Joe went looking for Roy, and found a portal to the Astro-Naut’s asteroid base, where he had moved all his prototypes and equipment.

Roy explains that the Mrevani, as bad as they were, are just one of a succession of warlike races that became that way because they got advanced technology before they were ready for it. Roy fears that if he allowed the US government to get possession of his technology, that may lead to humanity becoming just like the Mrevani.

Returning to Earth, Roy deactivates the portal behind Joe and Joe tells the government agents that he was unable to find Roy.

As the war continued, the Astro-Naut continued to fight for the Allies, but even though he got captured and escaped, his name was never mentioned in the US or in his home of Romeyn Falls. After the war, he disappeared from the public eye.

Until 1946, when an alien invasion hit Romeyn Falls. The Astro-Naut returned, leading a fleet of drone ships against the invaders. While the drones cleared a path to the aliens’ base ship, the Astro-Naut flew his own ship into the base ship and destroyed it, at the apparent cost of his own life.

Joe rushes to Roy Virgil’s building, hoping that Roy had used a portal to escape. When he gets to Roy’s home in the top of the building, he finds him bleeding and injured, and in the process of burning new files that he had been working on. Joe helps him destroy the files, but when they finished, he found his friend has departed back through the portal. That was the last Joe or anyone else saw of him.

In the aftermath of the invasion, Joe convinces the city council to rename the city Astro City in honour of the city’s saviour, and over the years the city lived up to its reputation as the home of heroes.

Joe never finds out what happened to Roy, but he likes to believe that he had some futuristic device on his asteroid that healed his injuries, and that he continued his adventures in outer space, and maybe finally found Xalzana again.

Positives
Busiek excels at giving a profound sense of realism to an utterly fantastic world, and this issue is no exception. He does this by showing us the amazing events that happen in Astro City, but through the eyes of the ordinary people affected by these events. In this installment, we see the story of the hero Astro City is named for, but through the eyes of his friend, Joe Greenwald. This makes for a poignant and human story, even in the center of earth-shaking events.

This is the one hundredth issue of Astro City, counting all the incarnations of the series, the specials, and the mini-series. And to mark this special occasion, Busiek has given us something special: the origin of Astro City itself. Well, sort of – we learn how Romeyn Falls became Astro City and a hotspot of superheroic, supernatural, and futuristic activity.

Negatives
The grounds I see for complaint is that Busiek gets you emotionally involved with the characters in story arc, and then moves on to completely set of characters in the next story. This often leaves the feeling a bit unfulfilled. On the other hand, it keeps the title fresh, not leaving you time to get bored with the current characters or story.

Verdict
Another amazing issue from Busiek. Astro City is still every bit as engaging and skilfully written as it was a hundred issues ago.