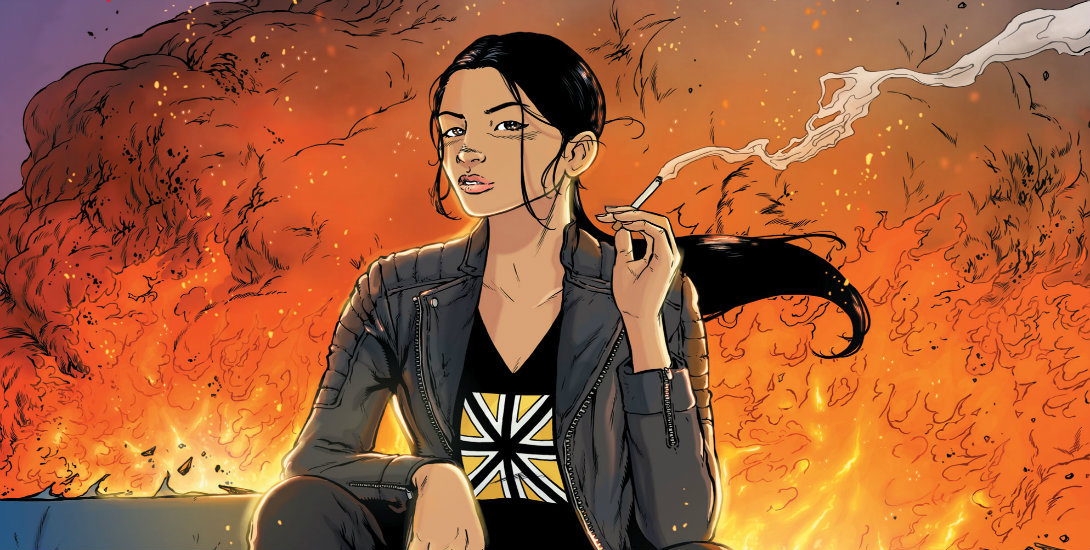 Summary
When we last left Angela, she was at Camp Hero. She is trying to figure things out. As it turns out, so is everyone else. Oh, yeah, also, everyone else who is looking for her also knows where she is, so Camp Hero is the worst hideout for tech thieves on the run. IO has sent some people to take Angela out. Marlowe has sent a Wild CAT to collect her. Grifter puts on his mask and literally blows a guy to smithereens. An AI gets destroyed…sort of. One more thing, Angela can manufacture drones from her mind-controlled dermal suit. So…stuff is messed up.

Positives
Jon Davis-Hunt has a lot to do. Why? Well, Warren Ellis gives him a lot to do. There is a ton of characters in this book and each of them has a look, or a power, or does some crazy flip thing, or can teleport, or has a chain smoking issue or… OK, you get it. In order for the reader to care about whatever it is that Ellis has them do, they have to be believable. It seems crazy to think that having a Wild Covert Action Team that teleports around the world seem believable, but Davis-Hunt pulls it off. Witness exhibit A:

Check out how casual Cole is. He just got TELEPORTED. Hands behind his back. Totally chill. You know, just a normal Tuesday night. Nothing to see here. Adrianna is totally TELEPORTING three people and she has it all under control. Kenesha’s goggles are on her forehead, she is ready for action, but only if you need her. Again, they are appearing out of thin air in front of a living weapon. Cool, cool. Look at the details. Angela’s hair is being sucked into the air. There are pieces of debris flying around her. She is going to lose her mind, but hey, the Wild CAT is totally fine. The saying goes that the devil is in the details, but there is nothing devilish about the art in this book.

What is that? One more page? OK:

Angela says “I am not having a stroke” three panels after an extreme close up her panic filled, stroke ridden face. Genius.

Of course, Warren Ellis deserves a lot of credit too. He is really setting this book up to feel like it is happening in real time. There are several panels where he turns the whole show over to Davis-Hunt and then he crams dialogue and backstory effortlessly into a few panels. I don’t know about you, but I like an old fashioned 9 panel page. I think the story moves along in a way that makes it feel deeper than a bunch of splash pages. The pacing is just right.  We know we are getting 24 books, so we are not in a hurry, but we still need to move toward an ultimate climax.

Negatives
There are a lot of random cutaway stories within the stories. While it is a great way to tell a story, sometimes they feel out of place. This issue, those odd panels happen right away, so we can absorb it, think about it, and get to the meat of the tale without getting distracted.

Verdict
I like it. It is growing on me. Based on what I can tell, those odd cutaway stories will call come crashing down eventually. How do I get a teleporter? Do I have to be evil? I guess I will have to keep reading to find out.