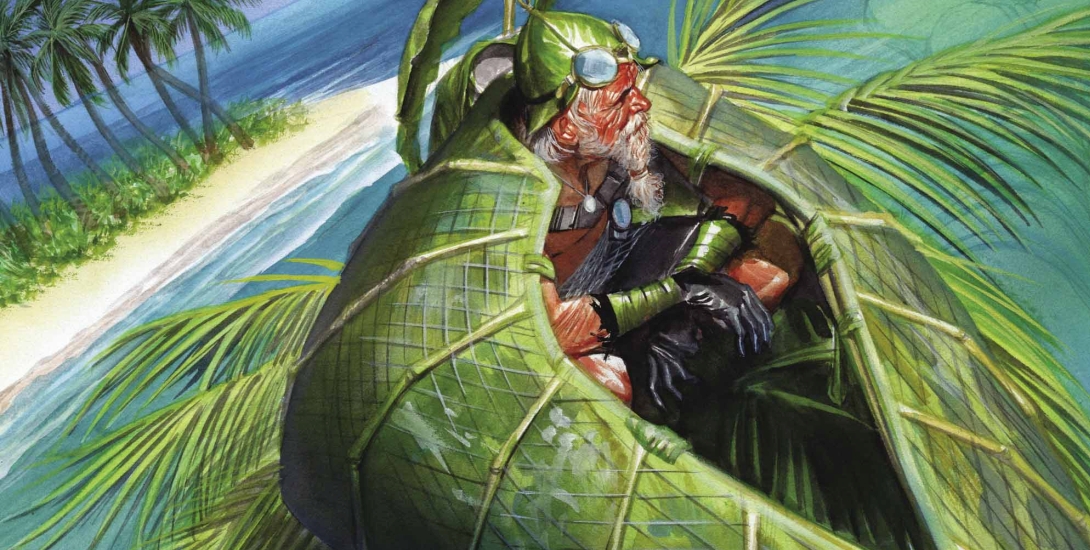 Summary
Several years ago, during a battle with the superheroine Mermaid, Mister Manta’s flight-enabled costume was damaged, leaving him lost at sea. If not for his ability to breathe underwater, he would have drowned, but instead he washed up on a deserted island, unable to leave the island.

He spent the next several decades recovering his lost technology to make his solitary life more comfortable, but more importantly, to repair his suit so he can escape the island and resume his career as a super villain.

Positives
Astro City lends a level of realism by either looking at the average people coping in a fantastic world, or by showing super humans dealing with very human matters. This is the latter type of Astro City story. Desire for power and victory over others led Mister Manta to villainy, but during this story, he realizes that these thrills pale in comparison to the real happiness that he has discovered in his island paradise. This tale has all the elements of comic book fantasy: superheroes, super villains, advanced technology, and pirates – but the main thrust of the story is one man overcoming base desires that stand in the way of true happiness.

Negatives
The only drawback is that because of the anthological nature of the series, we will move on to new characters and situations before we find out all we want to know about the current ones. Future issues may or may not return to them, but likely not for a while if ever. However, this isn’t necessarily a bad thing, as it gives the title more variety and allows a wider view of the world of Astro City than if it stayed focused on one constant set of characters.

Verdict
Another great issue of a great title. You never know exactly what kind of story you’re going to get with this title, but it’s a sure thing that it’s going to be brilliant.